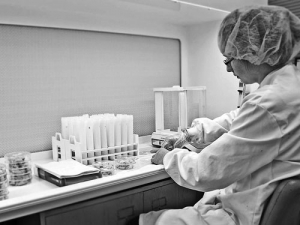 Kiwi scientists are using a chemical fingerprinting technique to definitively and scientifically prove if a wine is really what it says on the bottle.

Oritain has established itself as one of the world’s foremost research companies mapping food product origins and provenances. The international company which had its roots in the Chemistry Department at Otago University now bases its head office in Dunedin, with branches in Australia and the UK.

“Anything that ultimately is grown or derived from a soil has a distinct chemical fingerprint,” said scientist Dr Katherine Jones.

The ground-breaking work could have far-reaching benefits for the wine industry in brand protection overseas.

By collecting samples from a genuine product the scientists at Oritain analyse both stable isotopes and trace elements - including essential elements sodium potassium, zinc, iron and some 35 others.

These they run through unique statistical models to determine the product’s ‘origin fingerprint.’

Oritain can then conduct testing against this ‘origin fingerprint’ to scientifically verify if the product is consistent with its claimed origin.

The science used by Oritain originated in the criminal forensic field where it has been used to investigate fraud. Dr Jones said it has been thoroughly peer-reviewed and subject to numerous scientific journal publications over the last 20 years.

It has been estimated that food and beverage fraud globally is costing businesses US$40 billion a year.

According to a 2014 report to US Congress, up to 10% of all commercially sold food products are affected by fraud.

Dr Jones said fraud examples were common in China, with apples and honey being major targets of re-labelling.  Through fingerprinting it was now possible to identify at which point in a production process a new factor was introduced, as for example the addition of melamine to high-protein feed and milk-based products, to artificially inflate protein values in products that may have been diluted.

Chemical fingerprinting can work alongside the blockchain based traceability process used extensively by the wine and food industry through GS1 and bar codes, which relies on labelling and packaging, said Dr Jones.

This could be broken down even further to a farm or vineyard level or even an individual block as variations in soil and environmental properties result in slightly different fingerprints.

Members of the Central Otago Women in Wine group recently agreed to collectively support the project.  Each winery would be asked to send one bottle of wine for analysis, along with a fact sheet identifying precise vineyard location and other sub-regional data.

Samples were also being sourced from Marlborough and Hawkes Bay.

“If anyone is interested in contributing knowledge to this, the scientists would be very interested to collaborate,” said Dr Jones.

Company account manager Lucinda Garside said producers were now seeing the fingerprinting as an insurance policy, and they were starting to see the benefits of using Oritain as a third party protection of their brand.  They could use the Oritain certification trademark on their bottles.

“It’s robust science, and it’s been done for a long time. But now we’re trying to make it a more palatable story,” she said.

Simple design coupled with a product that ‘gets the job done’, has led to Datamars taking the Gold Pin at the Best Design Awards.