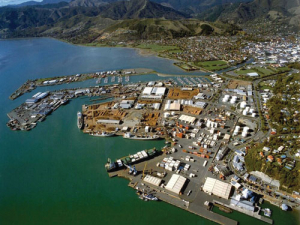 A birds eye view of the Port of Nelson.

Port Nelson has been a key infrastructure asset for the top of the south for decades but its importance to Marlborough is becoming even more significant, following last year’s 7.8 earthquake.

The port company is undertaking a $60 million, three-year capital expenditure programme that is designed to bring the port operation into the 21st century and ensuring it is fit-for-purpose as a modern port.

In recent years Port Nelson Limited has been gradually expanding the area directly under its control with many businesses that don’t need to be located in the port environment relocating to more appropriate commercial areas.

This has given the company the opportunity to demolish a number of buildings that were built in the 1950’s and ‘60’s and replace them with buildings designed for a modern freight operation.

Taking direct control of more land has also allowed the port company to enlarge its secure-fenced Customs Controlled Area (CCA). An important part of the redevelopment has been driven by very strong support from the wine industry resulting in the construction of a 13,000 square meter, $12m wine store, consolidation and distribution facility that will also be a Customs approved bond store.

Port Nelson CEO, Martin Byrne, says; “the wine volumes have risen dramatically, almost trebled, in the last three to four years and the container volumes have continued to increase so during peak times we’re extremely strapped for space. This facility will help us manage the wine related cargo volumes we handle now and in the future”.

Eugene Beneke, Business Development Manager for Port Nelson owned QuayConnect has been the driving force behind creating the facility.

“Marlborough is by far New Zealand’s largest wine producer and Port Nelson is the closest container port in terms of location, so we’ve set up a model called QuayConnect which is a collaborative transport and logistics model that has reduced cost and increased supply chain efficiency between Nelson and Marlborough.

“This means suppliers like OI Glass who freight bottles to Marlborough via Nelson at the moment, can use our facility for bottle storage and we simply send them to Marlborough as required.”

Beneke says working with the two largest players in the industry, Wine Works and OI, has helped a lot and having them as influencers has given Port Nelson good profile in the industry.

There are some very important advantages for the wine industry, other than reducing freight costs.

“Having an on-port unpack and storage facility means not having to move containers off site and of course the less you move wine the better. Being a secure customs controlled area cuts down on compliance costs incurred when wine is moved around, and it means we always have containers available and can meet vessel cut offs times. When the product is already at the port it is much easier to get it to the ship on time.”

Port Nelson also has the latest container and product tracking GPS systems to monitor every container passing through the port, right down to being able to identify individual bottles if required so traceability of product origin for export markets is much easier to provide.

One of the core drivers of the project is to reduce truckloads of pallet movements out the port gate and increase value per container.

“The main mandate from our business point-of-view is to ensure we can facilitate container growth from the port and capture the top of the south freight. In this case we can do that by giving the wine industry the best service and best option so they don’t need to go anywhere else” says Byrne.

There are other advantages of road and sea freight via Nelson now, with SH1 South of Ward out of action for at least a year due to the quake damage. With eight daily connections, five days a week from Port Nelson to the main export ports of Auckland and Tauranga they wineries are also able to export direct.