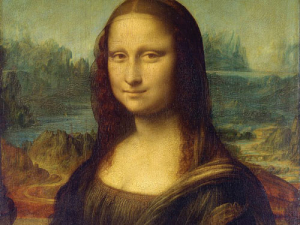 Everyone would agree this is the Mona Lisa, despite it being a photo rather than a painting. Synthetic wine is a similar representation, Alec Lee said.

The oldest archaeological evidence of wine made from grapes goes back to 6000 BC. But will that be the case in the future?

For thousands of years, wine has been a product that has played a role in festivities, religious events and day to day life. While some of those wines have been made from other fruit sources, the majority have relied on the production of grapes. Could this be set to change?

That was one question posed at Bragato, when Alec Lee CEO of Endless West talked about the creation of synthetic wine. While he didn’t go into depth about the process of making wine without grapes or fermentation, he did answer the burning question of why? And the answer to that question is multi-faceted. Firstly there are the environmental benefits, followed by a reduction in cost of production, the opportunity to create a consistent product year after year and then the efficiency associated with synthetic production.

So let’s break that reasoning down.

It takes far less water to produce a litre of synthetic wine than it does a grape fermented wine Lee said. “Depending on where the grapes are grown, wine will take anywhere between 300 and 1000 litres of water pre litre of wine.
Our process requires about 13. And there are advantages in terms of CO2 usage and also land usage.”

There is no down time waiting for the vineyards to come into production, to begin with, and there is no need to age wine in tanks, barrels or bottle formonths or years before releasing.

“Our product from start to finish takes, depending on what it is we are making, between four and 24 hours,” Lee said. “A very long time,” he joked.

This in the wine world is a bit of a mixed bag, Lee admitted, given there are always going to be wine connoisseurs who want to experience individuality as determined by terroir and vintage conditions. “When we talk about mass consumers though, they love consistency and they make up a large proportion of the wine market.”

Synthetic wines also allows producers to create prototypical wines. “Let’s understand what is prototypical about a Chardonnay or a Pinot Noir. Then we can mix and match and modify to create something new, different and unique.”

This perhaps is where traditional wines may be at risk. Lee said with conditions beyond the control of the winemaker, such as weather events, bush fires and the inherent use of pesticides, synthetic wine can continue to deliver year in year out.

So the burning question then, is synthetic wine a natural product or not? Lee is adamant it is, and drew on two very simple examples to prove his point.

One was the Mona Lisa, which he highlighted during his presentation. First he asked how many people in the room knew what this painting was. Then a little later, he drew everyone’s attention to the fact that he had used the word painting, yet what he was actually referring to was a group of pixels on a screen, that represented the Mona Lisa.

“If I said that is not really a painting, it’s a digital representation of a painting, you would all roll your eyes and be like; ‘we get that, but it still is the Mona Lisa’.”

Synthetic wine is the same, it is a representation of a wine, in just the same way an image is of a famous painting.

The other example he gave was digital music. Lee said the technology that digitalized music didn’t cause the death of the piano, cello or violin. It just made music far more accessible to consumers.  And it expanded the circle of inclusion within music.

“People were able to access this notion of quality at the click of a button without having to pay $100 or $200 for a concert ticket.”

Synthetic wine has the ability to accomplish the same thing.

“What we will be able to say is this is the breadth of the diversity that is able to be produced in wine. And as more people come into the fold and get to experience that diversity, they become more informed and educated consumers who will inevitable seek out the original version or new things.

“The high end, low production or expensive wines will not go away. But more consumers will be able to experience what they are like, even if it is just close and not quite 100 percent, it gives (consumers) the ability to experience what else is out there.”

So the taste test and reaction

The team from Endless West (previously know as Ava Winery) were tasked with producing a synthetic Sauvignon Blanc for Bragato attendees to taste The colour was good, the aroma was very close to an in-your-face Marlborough Sauvignon. Taste-wise, it wasn’t up there as a memorable Sauvignon. To be honest it tasted as though it had just been bottled that day, and needed some rest time. But given it was produced in four hours, it was an outstanding effort.

For John Forrest who attended the tasting, the results were a warning to the New Zealand wine industry.

“Those who have been looking after themselves by selling in bulk, cheaply, where it travels across the world in non-refrigerated bladders, then is mixed in with something else, beware. Synthetic wines will take those wines out of the market, and those involved in crappy bulk wines will be the biggest losers.”