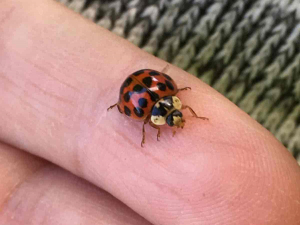 Native to Asia, the harlequin ladybird first arrived in Auckland, in 2016. Upon receiving notification of its arrival, MPI undertook an investigation and found it already too widespread for an eradication attempt to have any reasonable chance of success.

Since then, it has continued to spread rapidly and can now be found throughout the North Island and in several regions of the South Island.

The harlequin ladybird is a generalist predator (aphids being its preferred prey) that is known to feed on damaged fruit, including winegrapes, when other food sources are limited.  Larger than other ladybirds, it will prey on these too, so has the potential to reduce populations of beneficial insects in New Zealand vineyards.

Overseas, grape clusters infested with harlequin ladybird have been linked to taint and unpleasant odours in wine.  When under attack or crushed, the harlequin releases an odour made up of several methoxypyrazines.  If the ladybirds aggregate in the vines at harvest, they may be harvested along with the grapes and contaminate any wine produced with ‘ladybird taint’.

As the days get cooler, the ladybirds head into outbuildings and other vineyard structures.  In 2018, NZW received several reports of harlequin aggregations inside vineyard buildings and frost-fighting equipment from mid-May onwards, mostly from the Hawkes Bay and Gisborne regions.  This year, notifications of large indoor aggregations began to come in as early as the end of April, particularly from the Wairarapa, Horowhenua, Nelson and Marlborough regions.

Learning more about the pest

During 2018, NZW contracted Plant & Food Research to undertake a literature review about harlequin ladybird, to get a better idea of the potential impact it could have on the New Zealand wine industry.  The review report was received in December 2018 and can be found on the NZW members’ website, along with a summary document.  It highlighted several opportunities for further research, as much remains unknown in the New Zealand context.

NZW also asked growers to keep an eye out for aggregations of harlequin ladybird in the vines and fruit clusters prior to harvest.  Reports of sightings of low numbers of adults, larvae and egg clusters were received from several sites, but there were no issues with aggregations in the fruit prior to harvest, which is good news.  Members are encouraged to report further sightings of harlequin ladybird to the NZW biosecurity team over the winter period.

NZW and the Bragato Research Institute have again engaged Plant & Food Research to monitor the movement of harlequin ladybird in the vineyard and nearby habitat throughout the autumn harvest period and into winter.  A better understanding of when and where aggregation is occurring will help to determine the potential risk of taint to wine, as well as the best opportunities to implement control strategies.  Four Hawkes Bay vineyards close to riverbanks with willow trees (habitat of giant willow aphid, a preferred food of the harlequin) are taking part in the monitoring project.  All life stages of the harlequin have been detected in the willows along with many aphids, but very few have been found in vineyards so far. At the time of writing (early May), small aggregations were being found in vineyard outbuildings.  The intention is to monitor the numbers aggregating to understand when aggregations may be at their largest – this is the ideal time to use a contact insecticide, to most effectively reduce the numbers able to head back out into the vineyard come spring.

In the spring and summer, harlequin ladybirds in low numbers in and around the vineyard are nothing to be concerned about.  Regular surveillance is key – walking the rows and checking within developing clusters, particularly in any blocks with proximity to willow trees.  As close as possible to harvest, make a final check and if any ladybirds are aggregating in the bunches, a gentle shake should dislodge them – don’t spray them.

In the autumn (hopefully post-harvest), harlequin ladybirds head for shelter, often in vineyard structures where they aggregate in large groups.  Movement into structures is likely triggered by environmental cues (cold nights followed by warm days) and aggregation involves contact chemoreception rather than a volatile aggregation pheromone.  NZW’s advice to members finding aggregations inside vineyard structures is to take one of two approaches, either:

Spray any aggregations and the surrounding area with a residual insecticide – this will kill the ladybirds present and should also kill any others that come to land in the same spot.  Several places may need to be treated with this approach.

Allow aggregations to build up until high numbers are present, then treat with a contact insecticide to kill as many as possible in one place.

Either of these options should help to reduce the population of harlequin ladybirds heading back out into the vineyard when it warms up.

New Zealand Winegrowers will inform members of the results of the current monitoring project when they become available and there will be an update presented at Grape Days 2019.  More information about the harlequin ladybird, including the literature review done last year by Plant & Food Research, is available on the NZW members website.  Members are encouraged to continue reporting overwintering aggregations to This email address is being protected from spambots. You need JavaScript enabled to view it., with photos if available, and join the biosecurity and sustainability Facebook group, NZ Wine Kaitiaki, for further updates.