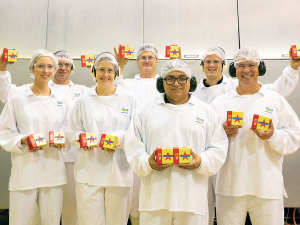 Now Australia’s most awarded butter, it was described by judges as “fresh and sweet with just the right salt balance” and “perfect for cooking or simply spread on fresh bread”.

Western Star Butter is Australia’s no1 selling butter brand; nearly two packs are sold every second and it’s retail value is A$205 million a year.

Fonterra’s Cobden site in Victoria has made butter for 90 years and production manager Samir Suri says the team is thrilled at its seventh win.

“Our Western Star Original Salted Butter is testament to the consistency of the butter we produce, the expert craft of our team and, of course, the quality of our farmers’ milk. It helps explain why one pack of Western Star is sold every second.”

Andrew Sharp, a butter maker at Cobden for eight years, said how special it was to win a contest with 50 finalists.

“I’ve always believed the butter we make is the best, so it’s great to be recognised for it.”

Grand Dairy Awards celebrated its 20th year this year, raising awareness of the quality and versatility of Australian dairy products.

To enter the national contest, a dairy producers must win a gold medal in a state-wide heat.