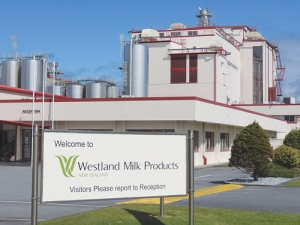 The West Coast is a challenging place to live and farm. High rainfall is a feature of the region and it has always struggled to develop a strong economic base. Isolation is another issue.

Coal, gold and timber were the region's original economic strengths but now it seems dairy farming and tourism are backbone of the local economy.

In 2001 when Fonterra was formed the ever parochial West Coast dairy farmers voted to create their own cooperative and not join the northerners. About then Westland Milk chairman Matt O'Regan, who farms at Inangahua, became interested in the future of the dairy industry. In 2005 he was elected to the Westland Milk Products (WMP) board, becoming chair six years ago.

"In 2001 when we went out on our own we were probably the most commoditised dairy company in New Zealand. We were recognised for quality powders but were very commoditised, but it's grown through that period and we have now moved to... produce high value food products such as our nutritionals and UHT. These are game changers for us and it is a big move for WMP."

One issue O'Regan says Westland faces is whether to grow the volume of milk it collects or grow the value of the products it produces. Westland stayed on its own in 2001 partly to grow the dairy industry on the Coast. Now milk production is double that of 2001.

"We have also taken on shareholders milk from Canterbury to ensure our commodity plants operate with efficient milk volumes. The returns farmers now require for their milk mean future processing facilities will need to add value above commodity products.

"If we continue to be a volume processor we will always have a fair majority in commodity processing, whereas if we take some of commodity processing and turn it into value add we can lift the payout for existing milk. It's a crossroads I think Westland is coming to – one we are going to have robust debate about, to make sure our shareholders are informed and get advice on."

O'Regan is a strong cooperative man, building on the advice he's received over the years from former directors. He believes WMP will stay as a pure cooperative but he won't rule out the possibility of the company acquiring subsidiary companies that could add value and increase returns to farmer shareholders. He points to the decision to buy the EasiYo yoghurt company in 2010 but says it may be possible for WMP to be a part owner of another consumer brand type company.

"Being a cooperative we are financially constrained because all the money has to come from the shareholders or bank debt. It's a structural issue we are going through at the moment and once we have a discussion paper prepared we'll take this to shareholders and see what come through as the best options," he says.

O'Regan believes WMP punches well above its weight as a company. He points to the challenges of collecting milk from farms in the region – the collection area is 440km long. Then there is the issue of transporting the finished product to Christchurch. He says despite the costs of processing milk on the Coast WMP is a very profitable cooperative.

As WMP moves down the value add path developing new products is a must. It has its own innovation centre.

"It's not so much coming up with flash ideas but rather being able to take on ideas and requirements from customers and having the ability and innovation to commercially make products that suit their needs," says O'Regan.

WMP has an office in Shanghai, crucial to its China strategy. If you are serious about doing business in China, you have to be there to build relationships, O'Regan says. Unlike many other countries where emails and an occasional visit will suffice, the Chinese want to see a commitment – people on the ground who will understand their requirements. But WMP is by no means China-centric and is looking to other Asian markets, the Middle East and Australia.

WMP is customer focused and works to build relationships from farm to consumer. Not surprisingly customers want quality, safe food traceable back to farm or factory. And they want to know how the food was produced and be reassured the environment, people and animals are well treated.

"The Westland culture is very much relationship focused and I'd like to think that starts with our shareholders right through to the consumer. As we get bigger that gets harder but we work hard to keep our shareholders informed. But the reason you have a board is to make decisions and sometimes because the directors are the only ones who can have all that information you have to make decisions and talk more about it afterwards. It's not perfect but it's better than any other system."

For O'Regan the focus as the chairman of a cooperative is always on making sure farmer shareholders get the best possible payout, good for them and for their wider communities.