Day out connects teachers with agri 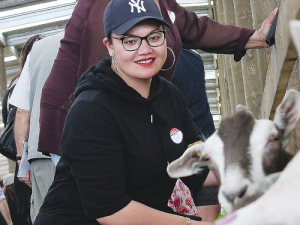 He manages the Oete Goat Farm nestled in rolling hills west of Pukekohe and has about 2500 milking does. The goats are housed in an airy purpose-built barn and fed lush grass harvested from surrounding paddocks.

“We’re one of the biggest dairy goat farms in the country,” said Murray, with the business for five years.

“We have eight full-time staff and a similar number of part-time and casual employees.”

The farm, owned by Matt and Sarah Bolton, sells its milk to New Image Group Nutritionals, which has a processing plant nearby in Paerata.

The milk is turned into milk powder and high-value infant formula and sold in NZ and exported to countries including China and Vietnam.

The farm recently hosted 80 secondary school teachers as part of an event called Teachers’ Day Out.

These are now run for teachers NZ-wide and are said to be helping change teachers’ perceptions and producers to connect with educators.

“Most of the teachers were from Auckland and it was their first time visiting a dairy goat farm,” said Trevor McIntyre from NZ Young Farmers, which organised the trip. “They were blown away by the level of skill and technology required to produce such high quality milk.”

“Visiting our business was an eye-opener for many of the teachers. I believe it helped change their perceptions of the agri-food sector,” said Murray.

Teachers’ Days Out get teachers of all subjects out of classrooms and immerse them in the paddock-to-plate food story. It was one of six held NZ-wide to show career opportunities in the primary industries.

Kerry Allen teaches agribusiness, agriculture and horticulture at St Paul’s Collegiate in Hamilton; she attended the Auckland and Waikato events.

“I came away feeling refreshed and excited about the growing number of opportunities out there, especially in agritech,” she said.

“My teaching benefits from my better understanding of a subject and that passion flows through to students.”

“We don’t have those in Waikato, so it was fantastic to be able to ask questions about the business,” said Kerry.

“It’s been a while since I’ve been inside a glasshouse, so it was great to see the new technology they’re using. I’m going to be talking about that back in the classroom.”

Bronwyn Dyer is a teacher at Hauraki Plains College, which has just planted 2000 trees – half of them blueberries – on a small farmlet used by students.

“I use everything I learn on the teachers’ day out. It’s important that students are not taught out-of-date information about the sector,” she said.

“It was fantastic to visit Aeronavics in Raglan which manufactures drones. The business is a great example of how a student with an interest in robotics and agriculture can be involved in the industry,” said Dyer.