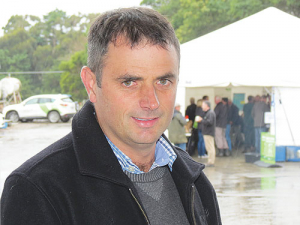 DairyNZ director Ben Allomes says dairy farmer morale has lifted in the last few months to sit now at six or seven out of ten.

He says a year ago it was much lower and even six months ago it wasn’t great, but he’s detected a change in the past few months.

No doubt the better milk price is a cause, bringing relief after a couple of tough years.

“I’m looking forward to the end of May, and being able to strike it off and look to the new season. I supposed even in bad times there are things you have to learn from and take positives from. But it’s been a wet hard season, and though milk prices are recovering there’s a feeling of shell shock or post-traumatic stress syndrome.”

He says farmers should feel happy that milk prices have come up, but he admits they are not as happy and as grateful as they should be. Weather patterns have been bizarre: Northland and the West Coast have been struck in ways abnormal for the times of the year they occurred.

And ongoing geopolitical issues continue to make market volatility a cause of stress.

Also distressing dairy farmers are the ongoing attacks on farmers in the news media, he says.

“It’s pretty raw and real all around the country when farmers get out of bed to do their best for their family and their country and then get cut to pieces. It’s unpleasant especially for kids at school being bullied simply because their parents are dairy farmers.”

It was telegraphed a long time ago that in election year dairy farmers would be targeted, but he says it’s terrible that young children are being drawn into the debate.

The rural/urban divide is a problem, but some of that stems from the way rural people act and behave and treat urban people. Now there’s a need to work with the urban community, not try to educate them.

The mainstream media make it challenging for the rural sector to get its good stories out in the public arena.

Allomes believes the public is interested in authentic stories and people, of which rural NZ has plenty.