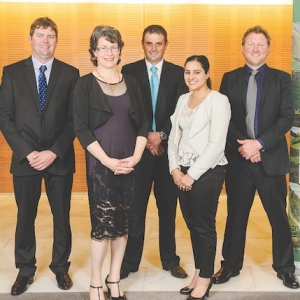 FOUR OUT of five of the latest Nuffield Scholarship winners are from the dairy industry.

Says Nuffield NZ chairman Julian Raine, “Only a handful are awarded each year so a Nuffield Scholarship is one of rural New Zealand’s most valuable and prestigious awards. To be a scholar is a life-changing experience.”

The Nuffield NZ Scholarship offers the opportunity for overseas travel, study of the latest developments in leading agricultural countries and an introduction to leaders and decisionmakers not accessible to ordinary travellers.

“It has been a brilliant experience for me, seeing other countries and a variety of cultures – mind boggling and eye opening. New Zealand has a huge opening… in food proteins and niche products; it’s there for the taking.”

Nuffield Scholars travel internationally for at least four months in their scholarship year (not necessarily consecutively), participate in a conference with 60 Nuffield Scholars from around the world and attend a six-week global focus in several countries with other scholars. They also have individual study and a research report due at the end of their travels.

WEST COAST dairy farmer Bede O’Connor (43) milks 340 cows on 170ha near Westport and is an elected director of Westland Dairy Co-op. O’Connor has increased production 25% in three seasons after buying his family’s farm in 2011.  He aims for self-sufficient farming to combat weather ups and downs. He is a member of the West Coast TB Free Committee, West Coast Rural Support Trust and the West Coast Focus Farm Trust. He was a regional judge for the Dairy Industry Awards Trainee of the year and is active in West Coast Federated Farmers.

SHARON MORRELL, BAgSc, is a regional leader with DairyNZ, Rotorua, interacting with farmers and helping run discussion groups, field days and workshops.  She works with partners such as the BOP Dairy Stakeholders Group. She has worked as a MAF farm advisor. With husband Ross she has worked on farm and raised four children. She did supervisory and consultancy work before moving to DairyNZ in 2010. She attended the Kellogg Rural Leadership programme in 2011.

SATWANT SINGH, BMS (Hons), (30) works weekdays for Fonterra’s commodity risk and trading team, and weekends on the family dairy farm near Morrinsville. Singh and her husband Sunil Krishna live in Auckland. One of her achievements is the guaranteed milk price programme for farmers. She was a service specialist for Fonterra (2006-2008), and an area manager in Morrinsville (2008-2012).

DAIRY FARMER Ben Allomes and wife Nicky own a half share in an 850-cow farm at Woodville, are 50/50 sharemilkers on a 400-cow farm at Woodville and a 215-cow farm at Ruawhata, and lease two other properties.  Allomes is a farmer-elected DairyNZ director and on their local school board of trustees. He has been involved with NZ Young Farmers, Primary ITO, Dairy Industry Awards, Fonterra Network and DairyNZ.  While president of Young Farmers (2007-2009) he helped reorganise it and jointly led the development of the NZYF leadership ‘Pipeline’ programme.

DAN STEELE is a farmer and conservationist living and working on Blue Duck Station, a 1460ha sheep and beef station.

Heavy weekend rain, in the lower eastern half of the North Island, will start to turn things around for farmers who have been facing a desperate situation with drought.

The dairy industry must look forward continually to assess itself as fit for purpose – or not.

The dairy industry must look forward continually to assess itself as fit for purpose – or not. So says retiring DairyNZ director Ben Allomes.

More than just a job

DairyNZ director Ben Allomes is advocating a paradigm shift in the way the primary sector markets and presents itself as a career.