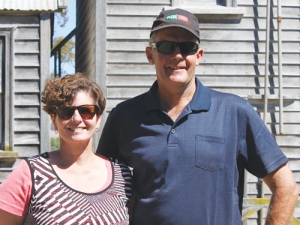 Four dairy farmers are among the 10 finalists for the 2015 Ballance Farm Environment Awards.

Rachel and Greig Alexander, Pakotai, were named supreme winners for the Northland region and Eltham dairy farmers Mark and Jacqui Muller and their manager Conrad Maeke won the top award for Taranaki.

Winners from each region will now contest the highly prized national winner title.

Simon Saunders, chairman of the New Zealand Farm Environment Trust (NZFE), says the calibre of entrants in this year’s competition was again very high, making it tough for judges to select the finalists let alone the supreme winners.

“I’ve [attended] most of the award ceremonies and what I’ve seen there has amazed me.

“Every entrant has a good story to tell and it’s incredible how much work is being done to improve sustainability onfarm. Much of this work is unheralded, so it’s good to see these hard-working people get recognition for what they are doing.”

Saunders says the 2015 awards attracted a diverse range of entries, with sheep and beef, dairy and horticultural operations all represented among the supreme winners.

The competition also attracted a number of first-time entrants eager to learn more about environmental sustainability.

“Some regions had a pretty tough year due to drought, but it was very pleasing to see that farmers were still willing to enter the competition and show what they were doing to improve sustainability and profitability.”

The regional winners will be honoured at NZFE’s National Showcase in Wellington on June 24. The national winner will be announced at this event, receiving the prestigious Gordon Stephenson trophy.

“I’d urge all farmers to get along to these field days because they are educational and inspirational,” says Saunders.

Five Canterbury farms have been announced as contenders in the 2020 Ballance Farm Environment Awards.

Five Waikato farms have been announced as contenders in the 2020 Ballance Farm Environment Awards.