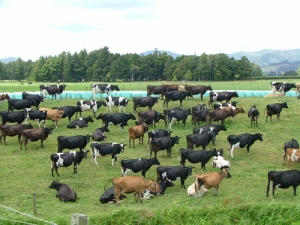 Stock agents are reporting that it is only recently that herd prices have come back because of Fonterra’s lower forecast payout for the 2015-16 season and following seasons.

A Hauraki Plains agent reports one of the main problems is the limited numbers of genuine herds.

He believed that representatives of Ngai Tahu have been looking for North Island herds to stock their recent dairy conversions.

PGG Wrightson livestock manager Waikato, Dean Evans, said most herds sold in his area have been priced between $1400-$1900/head. Most stayed in the North Island and 10-12 went to the South Island.

“As always quality rules and the well-presented herds with good records made up to $2150/head.

“Of course we would have liked more. But with 112 Friesian and Friesian cross in-calf heifers averaging $1700/head and the 92 in-calf carry over cows averaging $1750/head we were happy considering the season.”

Buyers were given free grazing until June 1.

The sale was run by PGG Wrightson with Joe Harris and Mark Begovich Livestock. – Tony Hopkinson