Murmur leaves after creating a bang 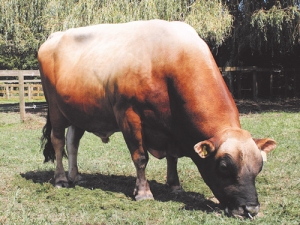 Six years of exceptional dairy progeny will remain the legacy of CRV Ambreed jersey bull Okura Lika Murmur as he retires this month, the company says.

Breeding manager Aaron Parker says Murmur has given nearly 500,000 doses of semen, and has 22,464 daughters herd testing in New Zealand and a long list of sons.

He is credited with having expanded CRV Ambreed's exporting market, especially in South Africa, North America and Australia.

"He has bred outstanding sons and daughters with super production, udder and capacity traits," says Parker. "Hundreds of his cows have been contract mated in NZ and as a sire of sons he has produced some of country's best Jersey bulls."

"Kingpin, CRV Ambreed's highest selling jersey sire this season, is a superstar in production because he is Murmur's son."

"Connacht is an elite young sire in our Jersey team this year based on his parental information and scientific data. With his daughters coming into milk this season, we expect to see big things from him," Parker said.

Murmur was bought in 2005 from breeders Luke and Lyna Beehre of the Okura Stud, north of Whangarei. The stud bred Okura Manhatten, a game changer for the industry.

Parker says after Manhatten, Murmur is the next most influential Jersey sire to have been bred in NZ. "We will be hearing Murmur's name in the dairy industry for many years."