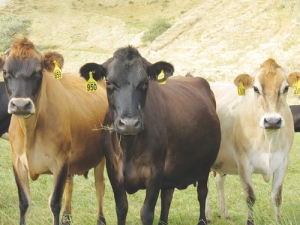 The addition of body condition score to breeding worth in February will accelerate the rate of genetic gain in New Zealand dairy cows, says DairyNZ.

Following ten years of research, body condition score (BCS) will in February be incorporated into breeding worth; it recognises the value of a cow's ability to hold onto body condition into late lactation.

New Zealand Animal Evaluation Ltd (NZAEL), a wholly owned subsidiary of DairyNZ, did research in late 2014 which determined this value to be $107 per late lactation BCS.

This research project followed a 2013 review of the national breeding objective (NBO) where farmers indicated that they saw a cow's BCS in late lactation as an important trait.

The economic value is driven by the remedial actions a farmer needs to take with lighter cows through autumn and winter, to get them up to BCS 5.0 before the start of calving. Achieving BCS targets is important because cows that calve in poor condition will be compromised for the subsequent season.

This change to BW is estimated to result in only minimal shifts for most herds and bulls ($0-$15). It is predicted that the new eight trait BW index will lead to faster genetic gain in the national herd.

DairyNZ's latest monthly newsletter Inside Dairy reports Waikato lower order sharemilkers Shane and Lynda Campbell saying they have been ahead of the curve in recognising the value of BCS in the 450-cow herd they milk near Matamata.

They have local veterinarian and accredited BCS assessor Katrina Roberts visit once a month. She reports on the spread of cow BCS and the changes since her last visit, and makes recommendations for the coming months.

The Campbells run almost half the herd as a separate mob containing the heifers and thinner cows. When cows' BCS is recorded as falling to 4.0 or below they are drafted out of the main herd. In the second mob they are fed an extra 2-3kgDM/day.

Campbell says he is looking forward to seeing the BCS trait incorporated into BW and believes it will confirm much of what he has witnessed in past years of recording BCS in their $132 BW herd.

"The top cows' condition seems to fall off a lot quicker over lactation. By putting the BCS trait into BW, that puts a value on their ability
to hold that condition, especially later in lactation. If you can get a cow that can milk well, and hold BCS, it has to be a worthwhile trait to consider."

They aim to get 300 days in milk, but he says they also want to be realistic about the cows being up to BCS 5.0 for the start of following season.

He acknowledges the cost of drying off early or getting a lighter cow up to condition through winter. Last season they had 20 cows at less than BCS 4.0 in February that needed drying off.

With several years of BCS history behind his herd, Campbell is also interested in the heritability of BCS from mother to daughter. He notices that cows that lose their weight quickly tend to produce heifers that do the same.

"It will be good to see the BCS numbers in the BW backing up what we are observing in the herd every season," says Campbell.