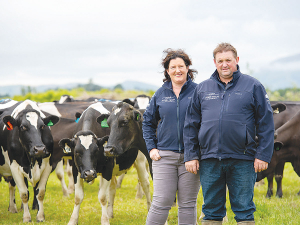 Paul and Kyllee Henton say they wanted a product on the floor with a decent amount of cushioning, and there was nothing on the market here.

Otago dairy farmers Paul and Kyllee Henton are firm believers in the idea that New Zealand farmers are innovators.

If something isn’t available, hasn’t been invented or can’t be done, there is always a farmer somewhere sourcing it, making it or doing it, says Kyllee, a registered veterinarian.

The couple, who run White River Holstein Friesians, did exactly that when they couldn’t find suitable flooring for their 600-cow wintering shed. They went into research and development mode and decided to manufacture their own.

It has resulted in them launching a company, Agri-Tech Imports, which they run alongside their 580-cow herd operation, supplying Mataura Valley Milk.

The couple have been on the farm for 15 years, after entering an equity partnership with Kyllee’s parents to purchase the property. The Pomahaka River sits just two farms over from them and the Heriot Burn waterway runs through the middle of their farm. They have flooded in previous seasons and Kyllee says they get snow most winters.

The harsh climate was the reason behind building the 600-cow wintering shed; they say the increased comfort for their animals equates to increased milk and ultimately increased profits.

The herd produces about 550 kgMS/cow, and they have access to the feed pad as they need. The Batt Latch gates are unlocked at 3am and the cows come in under their own steam ahead of morning milking.

As milking is finished, they go back onto the pasture until the gates are automatically unlocked again around lunchtime and the herd can head back onto the feed pad.

During the harshest winter weather Kyllee says they can keep the herd on the pad 24/7, and that is why they started looking for compressible flooring.

“We wanted a product on the floor with a decent amount of cushioning, and there was nothing on the market here.”

Paul’s brother David Henton, based in China and involved in manufacturing, narrowed down companies that could produce what they needed.

The mats are made in a mould rather than being cut, and they have a specially-designed compression layer on their base that makes them soft and comfortable.

“It gives the cows good confidence to walk around the pad and they don’t slip or fall. We knew it was a success when they started lying down and standing up just as they normally would in the paddock,” says Kyllee.

The lameness in their herd also dropped completely.

The Hentons use a gravity fed greenwash system to clean the pad, and collect rainwater off the pad’s roof to wash out the feed troughs. Green water is taken from the effluent pond on the property fed into a tank and when it’s released, it washes like a tidal wave down the feed pad, says Kyllee.

“It’s really effective and it’s the best way to manage the wash-down environmentally too,” says Kyllee.

While the mats were designed for their own use, Kyllee says other farmers became interested and they are now manufacturing the mats to order, selling direct to customers and keeping stock in Auckland and Otago to service both islands.

The mats are also used and Kyllee says dairy farmers have also found the mats useful for the entry and exit points on rotary milking sheds.