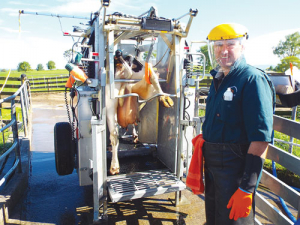 A race car with the best engine is never going to win unless the tyres allow it to get power to the ground, and dairy cows should be looked at in a similar light, says ‘The Hoofman’ – Johan Buys.

For a cow to be productive, fertile and able to walk 3km daily from paddock to shed she has to be right on her ‘pins’, he points out.

Buys’ mission is to help dairy and beef farmers understand the need for the weight bearing capacity of hooves to be maximised by animals’ good posture; this promotes their mobility, alleviates pain and helps them realise their full production potential.

Buys says research by DairyNZ shows cows with ‘poor’ feet can pass up $385 worth of annual production and fertility.

And he says farmers must start looking at cows as high performance ‘individuals’, rather than as a herds, then intervene early to prevent or eliminate ongoing problems. This might be as simple as watching for asymmetrical toes, which indicate a cow is favouring one side of the hoof against the other; this can be easily rectified and costs less than administering antibiotics.

Buys says this season he has seen lameness as high as 25% in herds. And he refers to evidence suggesting that a pre-season spike in facial eczema has led to metabolic problems, compounded by increased pathogens in persistent wet weather, hindering animals fighting infections and so contributing to lameness.

Important in The Hoofman’s treatment regime is a Dutch Wopa cattle crush supplied by Veehoof, Ashburton. It weighs about 1.5 tonnes and can deal with all animals including the largest bulls.

The Wopa SA0051 unit is towable, and carries its own hydraulic system aimed at making hoof treatment stress-free for the operator and the animal.

Once set up it needs only an electric power feed from the shed.

Cattle enter via a feeder race onto a flat rubber floor in the body of the crush. As they move forward, a laser device detects the head passing through the bail and it locks automatically. For ease of use the operator can activate functions from the rear of the feeder race, ensuring safe operation and avoiding getting his toes crushed.

Once the animal is safely secured the floor is raised on four hydraulics jacks to bring the animal to a comfortable working height for the operator, and its legs are lifted by a hydraulic hook system which works around the knee joint rather than
the more typical ankle area.

Buys says he can do routine or remedial treatment on 12-13 cows per hour. He always treats all four feet for balance and to prevent cows favouring a ‘good’ leg.

Treatment is by high speed power tools initially, then handtools are used to relieve pressure and drain infected areas. If intervention is necessary, wood blocks are fitted to the alternate claw to take aid recovery and take pressure off the heel.

Because bovine feet grow at about 1mm per week, and because an animal needs 3-4mm sole depth for healthy feet, 15mm thick, Dutch oak foot blocks are bonded to claws with epoxy glue, allowing around four-five weeks before they wear down, and allowing the hoof to heal.

Typical cost to the farmer is about $30 per beast for preventative care and $80 per animal for remedial work.