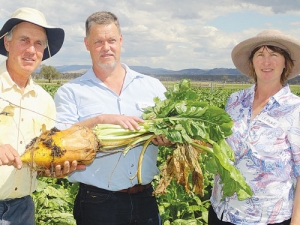 Fodder and sugar beets are shaping up to be the next big thing in grazing management, with the high yield, low cost option expected to take off in Australia as it has in New Zealand.

And warm Australian conditions up north lend themselves to even higher yields than those seen in NZ.

As the next lowest-cost option to pasture, beets have become hugely popular in NZ over the last 10 years, underpinned by extensive research led by Dr Jim Gibbs at Lincoln University.

Beets grown for NZ dairy and beef cattle have surged to 40,000ha in ten years, and the expertise developed is now exported to other countries; beets are now grown in Tasmania, Western Australia and Northern Territory.

Gibbs, a former Queenslander, has followed trials, now in their second year, at the University of Queensland dairy research facility at Gatton campus.

A large crowd of farmers keen to learn more from Gibbs attended a subtropical dairy field day at Gatton last month to inspect a trial crop used in break-feeding and to hear about the latest developments.

He said beets had been cultivated at least 500 years but had long been thought toxic to livestock.

Gibbs referred to tremendous improvement in agronomy over the last five years, resulting in more consistent, heavier crop yields. He has developed a way to safely transition cattle to consuming large quantities of beets.

NZ farmers in large numbers are now using beets as winter feed and as a lactation supplement.

Gibbs says the initial focus had been on strip grazing fodder beets, but a big future is emerging for harvested sugar beets with a higher percentage of dry matter. The beets were dug out, had their tops cut off and were pushed into windrows and successfully stored in the open for several months. With big herds up to 3000 cows, walking distance to grazing is a good reason to harvest beets and bring them to the stock.

The extensive NZ experience in growing and feeding beets will be made available to current and prospective users who subscribe to a new internet database being set up -- the Fodder Beet Club.

Gibbs says it is crucial that cattle be transitioned to a high beet diet of up to 12kgDM/day to avoid the risk of acidosis. The rate of beet feeding should not increase by more than 1kgDM every second day and all changes to existing supplements made slowly.

After 14 days, cows needed to be held steady for a week at the beet allocation and supplement levels reached, then have their beet allocation lifted steadily until they are leaving bulbs behind -- an indication they are eating to an ad lib level.

"With a successful transition, the classic NZ dairy diet is beet and pasture – nothing else," Gibbs says.

It may be low cost and high yield, but the fodder beets are not without their challenges in getting established.

Speaking at the Gatton field day, Jim Gibbs highlighted the agronomic practices necessary for establishing the vegetable crop and getting it through the first 60 days.

He says precision planting to achieve the right depth and seed spacing was critical and bed preparation was important to successful establishment.

Beet is not a strong germinator. Soil moisture is important and seedlings are prone to wind damage. He said the crop lent itself to irrigation with dairy effluent.

Achieving a good early canopy cover was the key to smothering competing weeds.

"Once you get through the establishment phase it's bulletproof," he says.

As a bulb crop it does not respond much to nitrogen. Key nutrient requirements are sodium and particularly potassium. Boron is a key trace element.

Yield expectations from trials at Gatton are that at least 30 tonnes DM/ha could be achieved. This would be an advantage of 30% over yields typical in NZ.

The leaf typically contains about 30% of the dry matter and protein level is about 25%. The bulb has a protein level around 10% or less and is low in fibre, but it has high sugar content which need good cow rumen function to digest.

The Gatton trial crop of fodder beet was planted into a fine seedbed in April at a 50cm row spacing and a density of 77,500 plants/ha. When feeding out began in September the crop was yielding about 24 tonnes DM/ha with 120 cows being transitioned onto strip grazing.