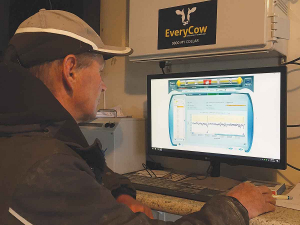 Identifying cows on heat used to be a time-consuming task on Owen and Cathy Copinga’s Southland dairy farm.

The couple milk 650 Holstein Friesian cows at Isla Bank, near Winton, supplying Fonterra year-round, with 200 cows calving in the autumn and the remaining 450 calving in the spring.

Split-calving means mating occurs twice a year for a total of 20 weeks.

Applying and monitoring heat detection aids, such as tail paint or scratch-off patches, was a costly and daily job.

“We used Estrotech breeding indicators. You apply them to a cow’s backbone and they’d change colour if they were rubbed,” said Owen.

“It was another job that someone had to do.”

“Sometimes the indicator would only be partly rubbed, making it hard to tell visually if a cow was on heat. Consequently, she would be inseminated when she may already be in-calf,” he said.

Improving the accuracy of heat detection was one of the drivers behind the herd being fitted with Allflex smart collars last August.

The collars monitor a cow’s rumination and activity, alerting farmers when the animal is sick or on heat. Those alerts can be accessed on a smartphone app, or a desktop computer.

“We’ve saved a lot of time and money no longer having to buy and apply heat detection aids,” he said.

“The collars have also enabled us to manage our non-cycling cows better.”

The Allflex programme automatically adds cows which have not cycled 35 days after calving to an anoestrous group.

“Last spring was probably the first time we were able to proactively manage non-cycling cows because we had real-time, accurate information,” he said.

The collars ensure cows having silent heats, which are usually undetectable to humans, are picked up.

“I do our artificial insemination. For a number of cows, there are no visual signs whatsoever that they’re cycling,” he said.

“But when I put my hand inside the cow, I can feel that she’s ready to be mated.”

It enabled Rivendell Holsteins to go bull-free for the first time and do 100% artificial insemination.

“The staff certainly do not miss having bulls around,” laughed Owen.

The monitoring system, which included collars for 650 cows, four antennas to relay data and computer software, cost the Copinga’s $140,000. It was a one-off fee.

The cost of setting up the system varies between farms, depending on their size and contour. The collars have a life expectancy of seven years.

They were fitted and installed during the wettest winter and spring Owen and Cathy have experienced for 20 years.

Despite the rain and poor growing conditions, the farm managed to lower its empty rate (the number of cows not in-calf) by approximately 5%. The final figure was 13%.

“We use a lot of sexed semen, but it’s vitally important that you get the timing of the insemination correct,” he said.

“The system automatically colour-codes heats, so a farmer can easily tell how long it’s been since a cow’s had a standing heat.”

The Allflex technology is compatible with the Copinga’s automated Jantec drafting software.

Information from the collars is downloaded as cows walk past antennas on the way to the milking shed.

As the cows exit the 50-bale rotary, any with heat or health alerts are automatically drafted.

“The modern high-producing Holstein Friesian is always living on the edge during the spring,” said Owen.

“That was another reason for us getting the collars. We wanted some extra technology that could help us identify cows who were struggling shortly after calving, but who were undetectable to us.”

Protocols have been put in place for staff to check cows drafted for a health alert.

“We had a freshly-calved heifer in the spring that triggered a health alert. We checked her milk and there were no visible signs of mastitis,” he said.

“However, when we examined the milk more closely, you could see she was developing mastitis. It enables us to treat the infection earlier.”

The Copingas have a big focus on animal health and nutrition.

“We only had one cow go down with milk fever last spring,” says Owen Copinga.

“The collars helped us identify cows pushing themselves to the limit which needed a preventative bag of calcium borogluconate or dextrose. That would trigger an immediate response and the cow’s rumination would be back to normal within 12 hours.

“We would not have picked up those problems that early without the help of the collars. They made a huge difference,” said Owen.

The Allflex system can even alert farmers if cows are active outside of their usual times, such as breaking out on a crop at night.

They receive technical and training support from the specialist Allflex IT team based in the South Island.