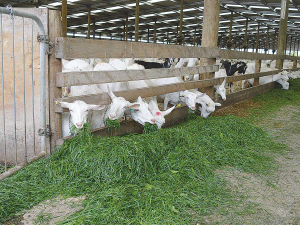 A number of goat farms this year experienced significant losses at kidding time and during early lactation. Farmers were puzzled as to the cause and unfortunately these losses happened rapidly, before any remedial action could be taken.

Such acute losses at this time typically come down to one thing: a catastrophic energy deficit experienced during a critical stress period, namely kidding and early lactation.

This disease goes under a number of names and confusingly can take a number of different forms. The most acute form is often called pregnancy toxemia in goats, or sleepy sickness. In dairy cattle it is more commonly called ketosis, or fatty liver disease.

These different forms can be made up of a range of symptoms but all emanate from the same root cause: a lack of glucose production. When the body fails to produce enough glucose for energy it kicks into survival mode and begins to break down fat tissue for energy, releasing ketones.

To fully understand this disease and its differing manifestations we need to have a good understanding of the stresses involved during the lead up to kidding and early lactation. At this time there is a rapidly increasing requirement for energy and the body needs to have the capacity to meet these needs within a very small period of time.

Ketosis is a metabolic disease common to all living creatures, but particularly problematic in high production ruminants. It will usually only appear at critical stress times, namely kidding/calving and early lactation.

Ketosis is related to the body’s inability to synthesise sufficient glucose from fatty acids produced in the rumen to supply its energy demands. The body then starts to mobilize body fat. The mobilised fat is broken down into non-esterified fatty acids (NEFA’s). When these non-esterified fatty acids reach the liver, they are either oxidised into energy forming substances (ketones) or removed out again as very low-density lipoproteins (VLDL’s). This process is complex and is largely regulated by hormones such as insulin, ghrelin and leptin (the satiety hormone).

The problem is, when the production of ketone bodies is upregulated in favour of the more efficient glucose energy cycle, it can lead to a significant energy deficit. A serious side effect of the over utilisation of fat for energy is fatty liver disease -- when fat goes into the liver in greater volumes than the liver’s capacity to process it, and this causes a fat buildup that can quickly lead to liver failure. Once established this condition is very hard to reverse, particularly in small ruminants with limited liver capacity.

Animals that are over-fat also have a tendency towards insulin resistance. Excess fat tissues release higher levels of leptin (the satiety hormone) which further reduces appetite causing the body to increase fat breakdown using ketones as the energy source. This would not be too much of a problem later in lactation. But when you take into account that ketones are a far less efficient energy source, ketone production is hard on the liver, and this is all happening during a high stress period, you can understand how these animals very quickly get into an energy deficiency crisis.

Three distinct pathways lead to this one problem

In a similar way to diabetes these are often referred to as types:

Type I: Inadequate feeding -- meaning insufficient energy in the diet.

This will cause the body to take emergency action and begin mobilising body fat reserves for energy in the form of ketones, never a good thing.

Diets at this time need to be formulated to supply high levels of readily available energy, relative to protein, and for obvious reasons fats should not be added to the diet at this stage, as they are not a readily available form of energy and can further hamper the liver in metabolising volatile fatty acids.

Target an increase in carbohydrate and starch, relative to any increase in potentially high crude protein containing grasses or silages. Grains are excellent sources of starch. However, it is important in any mixed ration to have sufficient fibre to maintain rumen pH stability. Rumen buffers added to the premix can help ensure stable rumen pH.

Type II: Over conditioning -- too much body fat can be a real complicating issue for this disease and is probably the leading cause of ketosis and related fatty liver disease.

Unfortunately, excess conditioning is not always easy to identify in goats. While dairy cattle accumulate fat under the skin, goats tend to accumulate this fat internally in their body cavities. Hence an overweight goat is not always so obvious.

Poor quality silage, particularly when fed around transition time, can be a game changer (in the worst way). This is the silage that we all know too well, the stuff with the sickly smell. It was probably baled or bunkered when the rain threatened the crop, or the contractor turned up too early.

Consider that it takes as little as 50 grams of butyric acid to cause severe ketosis in a goat during the transition period. A little more care and good practice at silage making can ensure a crop that delivers high levels of energy, which will lead to better production as well as lessen the risk of ketosis.

Shelter is one of the first considerations when contemplating the purchase of a doe, according to the New Zealand Dairy Goat Breeders Association.

The Australian dairy goat industry is relatively small, but there is an increasing consumer demand for healthy and exotic dairy products.

Worms are probably the biggest health problem for goat farmers.