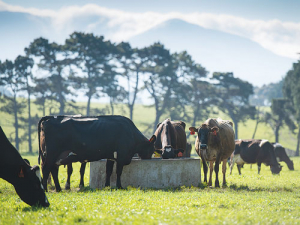 Some farmers could be heading into winter with low pasture cover, thinner cows and less supplements.

Decision making around dry off in spring calving herds has just got a whole lot tougher.

On top of yet another prolonged drought, farmers now face unprecedented potential disruption to the supply of stock feed and their ability to remove surplus stock and culls from farms as local carriers and abattoirs grapple with diminished capacity due to COVID-19.

At the same time, the very attractive current milk payout relative to next season’s unknown figure understandably enhances the desire to extract as many milksolids as possible out of the cows this season.

This scenario seems to be creating the perfect storm, where some farmers are now heading into winter with lower covers, thinner cows, less supplements and higher stocking rates than what is typical.

Over the last few weeks, herds that I have been asked to body condition score (BCS) appear to have both a large variation in cow condition and more cows than usual at a lower BCS of 3.5-4.0. But unique to this season there is greater motivation to keep production going for longer than normal, to the detriment of the cow herself.

So one can only conclude there are more cows at risk of falling into this 3.5 -4.0 BCS category over the next few weeks.

Unfortunately, the cows’ biology hasn’t suddenly changed with these unprecedented global events and the more Peter is robbed to pay Paul the greater next season’s headaches will become.

Doing the maths for a typical 400 cow herd where 50% of cows are 3.5 and 4.0 BCS, an additional 35-40 tonnes of feed will be required over and above what is needed to maintain the herd to get these cows anywhere near the target BCS.

If this level of extra feed is unavailable and culls are not moving off the property as planned due to disrupted logistics, there will be an inevitable knock-on effect with greater animal health issues around calving, suboptimal production and subsequent impaired reproductive performance.

So while it is certainly understandable to maximise production this season, make sure you are also considering next season. Failing to plan is the same as planning to fail.

Last autumn, here in the Waikato we were granted a get out of jail pass with pasture growth phenomenal through April and May. Banking on the same happening this year could land you in the cactus.

If in doubt, get a second opinion, either through a farm advisor, nutritionist or your veterinarian. This season, more than any other, having foresight, feed budgeting and sticking to a plan will pay dividends.

• Greg Jarratt is a vet and director of Matamata veterinary services.