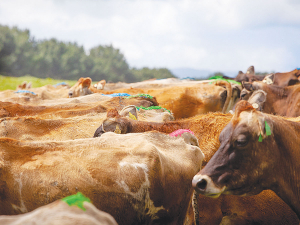 'Silent' or 'quiet' heats are where cows cycle but do not appear to show visible heat behaviour.

This mating season your objective will be to get as many cows in-calf, as early as possible.

Genetic gain and empties aside, missing a cycle can feel like pouring three weeks of milk down the drain.

'Silent' or 'quiet' heats are where cows cycle but do not appear to show visible heat behaviour.

Missing these quiet heats is a frustrating lost opportunity that drags down profitability. And profit is what buffers increasing farm costs, pays down debt and helps to form a hedge against future industry downturns. This month, Federated Farmers reported that a quarter of farms are breaking even, with 8% making a loss.

With mating now approaching, it's almost that time when you'll be wondering how to successfully AB silent or quiet cows that are likely to get missed by your team. You've incurred all the costs of running your operation and will be keen to put any missing value back on the table if you can readily do so.

Studies show that silent heats can be more than 10% of the herd and that there are many contributing factors. DairyNZ states that 70-80% of cows will not have a visible heat at the first cyclde after calving, late-calvers showing quieter heats until their hormones also gear up. Even with pre-mating heats behing you, and late calvers managed, what challenges might you anticipate from silent heat this mating season?

Cows evolved with hormon-driven 'heats' as a herd behaviour. The primary signs of heat are well-covered elsewhere by DairyNZ and others. Cows don't need to examine tail paint or receive an alert to know when other cows in their herd are cycling. As far as cows are concerned, silent heats don't exist. Herd mates are either cycling, or not.

On the other hand, farmers need to accurately identify the sexual 'heat' behaviour to AB at the best moment to improve odds of conception, especially when investing in higher-merit straws or sexed semen. For strongly bulling cows, that's easily achieved. For quieter heats on sneaky cows, it can be almost impossible for humans, usually because our heat detection methods don't capture enough of this sexual behaviour between the cows.

While heat detection aids have come a long way, they are of absolutely no use with non-cycling cows. There simply isn't any heat to detect. Out of interest, analysis of 5,800 cows in eight US herds showed almost a quarter of lactating Holstein cows were not actually cycling. Generally, New Zealand dairy herds have higher fertility than those in the US, however.

On the cow behaviour side of the equation, the number of cows cycling without showing strong heats can be impacted by management factors that can affect their ability to express their ability to express normal heat behaviour. Nutrition and energy relative to seasonal conditions, feet and leg problems, lameness, slippery footing, and heat stress being more obvious examples.

With regard to successful detection of this cow behaviour, the sensitivity of heat detection methods and skill level of the operator are key factors for accurately calling quieter heats.

How many cows display insufficient heat behaviour for humans to notice? A well-known, large 2014 study by Dr Paul Fricke and several other leading researchers demonstrates that even a combination of heat patches and activity monitors completely missed 10% of cows that were confirmed as having cycled during the study period.

Clearly the opportunity to identify a further 10% of cycling cows would have significant impact on profitability for those operations. But it's often human nature to avoid digging into data and attempting to quantify what might be getting missed. Failing to look further can be expensive.

At a minimum you might examine 'non-cycling' data and consider how many cows join this group simply because of limits in heat detection and recording tools, or limitations in your team's ability to get the most out of these tools. Discuss this data with your team regularly throughout mating and look hard at how submissions have converted to conceptions in previous seasons. Think about which groups of cows are at greatest risk of being missed and discuss how making more detailed records might help.

With greater confidence in your heat detection efforts, there is also a stronger case for timely vet intervention where cows have not been recorded on heat during the expected period.

When considering quieter heats, available detection methods function quite differently and have different sensitivity levels. Paint, patches, and rump-mounted devices rely upon primary heat behaviour, whereas activity monitors rely on pedometry and a range of other secondary signs of heat. Researchers suggest that the highest sensitivity is achieved through accurate monitoring of primary heat signs.

Where cycling cows are not exhibiting enough of the heat behaviour that farmers are trying to capture with heat detectors, we either accept the financial implications from missing these cows or; seek out heat detection with greater sensitivity, capable of capturing additional behavioural 'signal' between cows.

It's the cows that have evolved to know the status of herd mates, not us. To pick up quieter heats, we're looking to measure more subtle sexual behaviour between animals without driving up 'false positive' alerts. With sexual behaviour, it's the interactions that matter, not what each individual cow is doing on their own.

All About Conception Rate

Most heat detection methods require experience and skill to operate. New Zealand is going into mating with a record half of all farmers surveyed in July by Federated Farmers' stating that it has become harder to recruit skilled and motivated staff.

This is the highest level of concern since the survey started.

Tail paint and stick-on patches require interpretation, often resulting in one person taking responsibility for weeks of heat detection. More complex approaches to heat detection require investment in staff training time until they are capable of interpreting multiple streams of data to then make critical AB decisions. So even the most highly experienced people will miss heats, typically because of the sensitivity of the tools they use.

Quiet cycling won't behave in ways that rub tail paint or patches, nor reach thresholds to trigger an activity monitor alert. To be fair on operators, herd size has increased over time, so even the best operators can't afford much attention for each cow.

The proof of your heat detection approach is conception rate. Accurately identifying as many heats as possible without false positives is the first challenge. The second challenge is to get the timing right - that too is reflected in higher conception rates. Getting cows in-calf as soon as possible is the entire point after all.

If calling "50/50" cows accurately is where heat detection earns it's keep by reducing decision-making stress, then identifying quiet heats and getting them in-calf is the icing on the cake.

In the end, heat detection is a practical balance of cost outlay that makes sense for your operation long-term, through high and low payouts and the ability of your team to use these tools with ease. Shifting this balance to go after more quiet heats is well worth considering as we head into mating.

The power of beef genetics

Now into its seventh year, the Beef+Lamb New Zealand (B+LNZ) Genetics Dairy Beef Progeny Test (DBPT) continues to create value for both the beef industry and the dairy industry, by identifying and enabling the widespread use of superior bulls for use over dairy cows.

Using DNA to identify the unique make-up of a dairy cow will become an increasingly powerful tool for dairy farmers as they look to fast-track the genetic gain of their herds, says new CRV myDNA product manager Anna Morrow.

With pressure growing on the farming industry to minimise wastage, reduce omissions and develop sustainable practices, many dairy farmers are now proactively looking for opportunities to optimise their herd and derive complementary income through involvement in a dairy beef value chain, says First Light Wagyu.