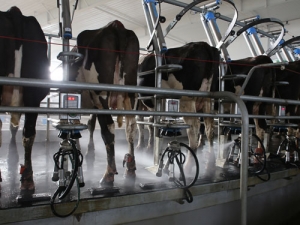 A nationwide study to evaluate the effectiveness of a vaccine in controlling mastitis in dairy cattle is well underway and preliminary results are positive.

Southland veterinarian Dr Mark Bryan spoke about the preliminary data from the study, at the Pan Pacific Veterinary conference in Brisbane.

Mastitis, a bacterial infection of the udder, compromises the production and quality of milk and can impact growth rates and survival, leading to a loss of farm productivity and profitability.

The study, which looks at the Staphylococcus aureaus vaccine Startvac®, includes 8858 cows from 16 farms across three main dairy regions in New Zealand.

Bryan says European studies have shown that commercial vaccines have been successful in reducing the incidence, duration and severity of both subclinical and clinical mastitis.

"This has led to improved milk production, a lower culling rate, has increased the number of healthy cows within a herd, and reduced mastitis-related costs," he says.

"However, we need to assess how the vaccine performs under New Zealand conditions, particularly in reducing the number of clinical cases and Somatic Cell Count (SCC).

"The two key differences in the New Zealand system compared to the European are the seasonality of our industry and its pastorality. Most cows are grazed outside for the majority of the year, on pasture or other crops. However, with changes in intensification, New Zealand's dairy industry is becoming more similar to the European industry every season."

Bryan says that initial analyses indicate a possible difference in the proportion of cows with mastitis between treated and untreated cows (11.5% vs. 13.3% respectively). However, more data and further analysis are needed to judge the vaccine's effectiveness in the New Zealand farming environment.

The study involves the longitudinal effect of the vaccine within herds, placebo effects of taking part in a mastitis trial within a herd, and regional variations between herds.

"We are also looking at farm-level changes in behaviour and the impact on milk quality. Our assumption is that when farmers are enrolled in a study, their behaviour may change," says Bryan.

The study began during the dry period in the 2014-2015 season and will finish later this year.