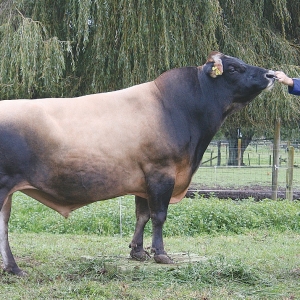 Pukeroa TGM Manzello’s breeders, Alan and Vivian Lockwood-Geck, say “The thought of how many cows will not be inseminated by him over the next four to five years is a huge shame.  He won’t be easy to replace in the short-term.”

Manzello in February 2013 hit the top of the RAS list.  He has maintained a top spot on the list ever since, the company says.

“He will make a significant impact in New Zealand and abroad with sons coming into AI and daughters becoming the next generation of brood cows,” says Dowse.

“Manzello was frequently selected by farmers to improve the overall productivity, longevity and fertility of their herds.  His daughters are well-liked and demonstrate good conformation and great shed traits,” said van Elzakker.