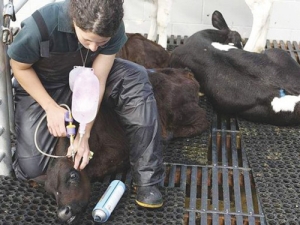 Younger dairy farm workers newer to the industry but working closely with their veterinarians are more likely to use pain relief on dairy cattle on farms, a survey has shown.

The survey, by two large South Island vet companies, concludes that more study is needed of the onfarm use of non-steroidal anti-inflammatory drugs (NSAIDs).

The results were presented in a paper by Mark Bryan, Elena Knupfer and Shen-Yan Hea, of VetSouth, Winton and Invercargill, to the NZ Veterinary Association conference in Hamilton last week.

Amongst all farmers, animal welfare was the main reason for giving NSAIDs to animals, followed by vets' advice and return on investment, the survey found. The importance of animal welfare increased with the usage level of NSAID.

The cost of the product, withholding periods and non-veterinary advice were more important for low NSAID users than high NSAID users.

NSAID use was associated with empathy for and perception of pain in the animal. High NSAID users tended to perceive higher levels of animal pain compared with low users. For most conditions, vets perceived an equal or higher level of pain in animals than the high users.

Vets perceived lower levels of pain than farmers in cases of gut surgery, dystocia, caesarean section and sick cows. This may reflect their greater exposure and familiarity with these conditions.

However, a 2009 survey of NZ dairy vets found that claw amputation, caesarean section and LDA (left side displacement of abomasum) surgery were ranked the highest with regard to painful procedures.

Low NSAID users tended to have greater experience in the dairy industry.

Although NSAIDs have been available since the 1980s, their adoption commercially in NZ has been slow, and this finding may reflect the fact that older and more experienced clients may not be as familiar with their use as younger clients with less experience in the dairy industry, the paper says.

Low NSAID users were more cost conscious and were influenced by other factors such as withholding periods, treatment length and non-veterinary sources of information and advice.

Low NSAID users were less likely to be aware of the potential benefits of NSAID treatment.

The level of NSAID use in animals did not appear to be associated with personal pain experiences/perception or personal NSAID use.

"These results are an important step towards understanding the factors that may influence NSAID use in animals, and help identify areas of opportunity to improve animal welfare outcomes for some potentially painful dairy procedures," the paper concluded. Further research was needed.

Two large vet practices were selected for the study, which began with electronic surveys being distributed to a random selection of dairy clients in the practices' databases.

Non-steroidal anti-inflammatory drugs (NSAIDs) have anti-pyretic, anti-inflammatory and analgesic effects in cattle, and are often used with antibiotics to treat disease and reduce pain and inflammation after trauma or surgical/painful interventions (Smith 2005, Anderson and Muir 2005).

They were first introduced in the 1980s primarily for the treatment of acute mastitis.

The rate in the dairy industry is also lower than in other countries. However, the rate of use of NSAIDs is still relatively unknown in NZ, the paper says.

The Government is being urged to elevate veterinarians to critical worker status to help ease an acute shortage.

Farmers to wield the needle from October 2019

Farmers will be able to administer a local anaesthetic for disbudding or dehorning, if they are trained, when new regulations come into force on October 1, 2019, says NZ Veterinary Association chief veterinary officer Helen Beattie.

Strains of the helicobacter bacteria, which live in the stomach, are now believed a possible cause of abortion in ewes, following MPI investigations.

A UK expert has warned that less-than-ideal onfarm biosecurity in NZ could lead to a more widespread outbreak in the event of a serious animal disease epidemic here.