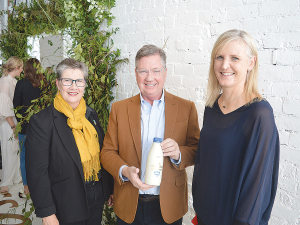 “NZers want a really good milk at a price that’s affordable,” he says.

Cullinane says LRC loves the idea of making Jersey milk ice cream. However, the priority is to get the Jersey fresh milk business right and secure regular supply from Jersey farms.

A major hurdle would be finding an ice cream processor set up for Jersey milk only. Right now ice cream makers are only set up to process milk from mixed herds.

“But I love the idea of doing Jersey ice cream as soon as we can… and Jersey chocolate milk.”

The Jersey milk sold by LRC is permeate free, PKE free and bottled in the brand’s award winning recyclable rPET bottles made from recycled plastic.

Cullinane says the single breed milk aligns with clear trends among its customers who “want to know the provenance of their dairy”.

“They want whole products that haven’t been over processed and they want to be able to taste that difference.

“With a single breed standard Jersey milk we can do all those things, and at a more accessible price for consumers.”

“We’ve gone to huge effort to segregate the supply coming from our Jersey herd and to leave it as untouched as possible from the shed to the shelf.”

“We’re providing milk the way it used to taste, before everyone started chasing cheap and bland volume,” says Cullinane.

Jersey NZ president Alison Gibb says the launch validates the belief it has in the power of the Jersey cow.

She told Dairy News that the Jersey breed is “riding on a crest of the wave on the back of the high payout”.

“This validates the belief we have in the power of the Jersey cow. She is more than a just a pretty face. She has many attributes and this launch could not come at a better time.”

Gibb is sure that Jersey milk will feature in other dairy products from LRC. “I know it won’t be just milk,” she says.

Jersey cows make up about 15% of the national herd -- the highest percentage in the world.

A trip down memory lane

The release of Jersey Milk by Lewis Road Creamery is an exciting opportunity for everyone and a trip down memory lane for some, says Jersey Profit spokeswoman Lyna Beehre.

“The special milk qualities of our Jersey cows are well known: richer, creamier milk not only looks great but is made up of a higher percentage fat, and the higher A2A2 components bring real taste and health value to the consumer.

“For some the ratios of lactose and A2A2  in Jersey Milk will allow consumption of milk by those who may not usually tolerate dairy products.

Selling Jersey milk as a specialty gives our farmers an opportunity to showcase the premium product from our Jersey farms.”

She says consumers may take a trip down memory lane in drinking the pure Jersey milk that was the norm on their grandparents’ farms.

“The creaminess and full taste of Jersey milk on your porridge cannot be beaten.  For many others, as connections to dairy farms have reduced over generations, this will be a first try of this beautiful product on its own.”

Beehre says Jerseys used to dominate our national herd, but time has brought a fashion swing in preferred breed.

“This has had a big impact on the makeup of milk in NZ.  Jersey farmers are enjoying seeing the positive trend towards our breed, and consumers being able to identify the Jersey influence is only positive.