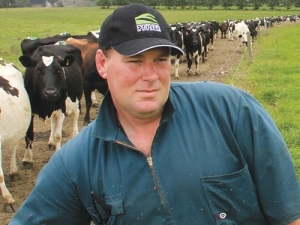 Dairy farmers are being urged to make their businesses resilient around a $5/kgMS payout for the next few years.

Federated Farmers Dairy chairman Andrew Hoggard says there are "no great signals out there" to say prices will return to exceptional levels anytime soon.

His comments come as Fonterra joined other dairy processors in slashing its forecast payout for the 2015-16 season ending May 31.

ASB has also trimmed its forecast payout by 50c to $4.10/kgMS; economist Nathan Penny, however, believes that dairy prices will move higher over 2016.

"However the timeframe for supply and demand rebalancing has moved further out and largely depends on a downward correction in EU supply in response to the lower global prices. These prices are clearly unsustainably low for farmers globally and cannot continue in the longer term.

"It is important to state that despite the current challenges we have confidence that long-term international dairy demand will continue."

But Hoggard told Rural News that farmers have been hearing for the last two seasons that dairy prices will pick up at the end of the year.

"There's a variety of information out there; some are saying things will pick up in 2016, others are saying it will be 2017 or beyond. It's hard to know how things will pan out."

Hoggard says with future dairy prices unpredictable he would be planning his business around a $5 payout for the next several seasons and urges others farmers to do the same.

He believes the 45c drop in Fonterra's forecast payout won't come as a surprise to farmers. "The other dairy companies have dropped their forecasts and the first two GDT events of the year went backwards."

"Key factors [undermining] dairy demand are declining international oil prices which have weakened the spending power of countries reliant on oil revenues, economic uncertainty in developing economies and a slow recovery of dairy imports into China. In addition, the Russian ban on European Union dairy imports continues to push more product onto the world market.

"There is still an imbalance between supply and demand which continues to put pressure on global milk prices. Since last September prices on GDT for whole milk powder have fallen 12%, and skim milk powder prices are down 8%."

Westland chairman Matt O'Regan says the new predicted payout of $4.15-$4.55/kgMS will be grim news for its shareholders.

However, given the widely publicised state of the global dairy market it was not unexpected, he says.

"Major volatility around the globe has sharemarkets on edge with concerns about China's short-term slowdown perceived as a key risk to global fortunes, despite that country's 6.8% growth figure."