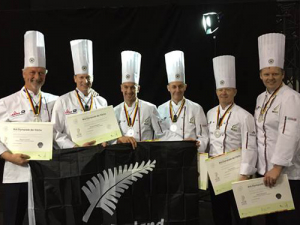 The New Zealand Anchor Food Professionals’ team of chefs has taken out silver at the 2016 Culinary Olympics in Erfurt, Germany.

This comes on top of winning two bronze medals in the cold Culinary Arts section two days earlier. Pastry chef Ganesh Khedekar created a chocolate centrepiece featuring Gollum which was a huge drawcard for the crowds.

Fonterra’s director of Global Foodservice Grant Watson, who’s with the team in Germany, congratulated the team and says the silver medal is thoroughly deserved.

“It’s been 28 years since a New Zealand last competed in the Culinary Olympics here in Germany. What they’ve accomplished is nothing short of amazing. Their hot dishes were exquisite and loved by the 110 guests and judges who were at the dinner.”

Prior to heading to Germany, the team honed their skills and the menu at a series of regional ‘feasts’ up and down the country, while also practising for their cold table presentation.

NZChefs’ president and chef de mission to the New Zealand team, Graham Hawkes, says the team is thrilled with the result.

“The chefs have put everything into this competition. The food they served up to a sold out service really wowed the guests and the judges, and gave them a real taste of New Zealand,” Hawkes says.

The first Culinary Olympics was held in 1900 in Germany, when four countries competed but has grown to more than 2000 chefs from 40 countries serving up their best for the judges.

Fonterra Global Category and Innovation manager Keith McDonald, who’s handled logistics for the team in Germany says the chefs have run on adrenalin and very little sleep since arriving there.

“Every minute has been spent driving perfection in their dishes so to take out silver against other countries’ teams that spend all year travelling from competition to competition is a fantastic achievement. These guys have definitely earned this medal,” McDonald says.

The overall winner for 2016 was Singapore.