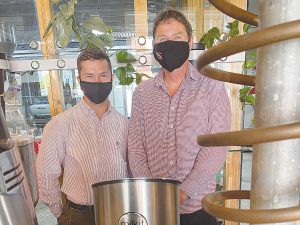 Fonterra Brands New Zealand (FBNZ) is kicking off a trial which will see baristas making the same great coffee, but with a more sustainable pour, using 'Anchor café milk taps'.

The co-operative says this is another step in Anchor taking a leadership position around sustainability and follows on from the launch of Anchor's plant-based bottle and the specialised range of 'carbon zero' milks.

FBNZ director for marketing, Mike Boness, believes cafés and coffee shops will also benefit because the milk tap measures the precise amount of milk into coffee cups, which means less waste and ultimately reduces their costs.

Anchor will be trialling 10 milk taps across the country and taking feedback from customers.

The first trial café is Emporio Coffee located in Wellington and owner Eric Heycoop is excited.

Heycoop says more people want to know that their food and drink is being served more sustainably.

"Because there is less waste and spillage with every pour from the taps, it means less cost for us and increased productivity and time savings for the baristas making coffee," he says.

"From our perspective it also enhances the whole café experience because it gives us more time to connect with our customers."

Boness says a team from Fonterra research centre in Palmerston North has conducted an evaluation of the available tap systems.

"The MilkIt system (supplied out of Israel was recommended as the best fit for Anchor proceeding to trial in cafés," he adds.