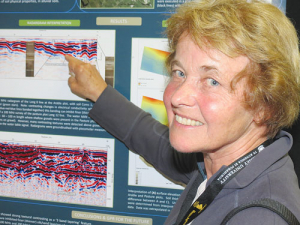 Technology used by archaeologists to find artefacts in the ground is now being trialled by New Zealand soil scientists to see if it can help mitigate nitrogen leaching on farms.

Dr Carolyn Hedley, a soil scientist from Landcare Research, presented a paper on the use of ground penetrating radar (GPR) at last week’s annual Fertiliser and Lime Research workshop in Palmerston North.

“The key is to get these pretty pictures which are imaging the soil and material below that and link that to management. The sort of things we see when we see with the GPR and other imaging equipment is the depth of gravels where the ground water is. That helps us to know where the deeper soils are so you can potentially irrigate more. It will also help us to better understand and manage high yielding soils and identify the soils that are more prone to leaching,” she says

Hedley says the GPR also helps see the spatial variability of soil depth and gravels. She says in the past, GPR like lysimeters has been bulky and not portable, but this has now changed and the GPR is now mounted on a trolley, connected to GPS and simply pushed around a paddock. The end result is a series of images which scientists can analyse and interpret to give a more accurate picture of the soil structure.

Hedley says the work is still in a trial stage, but if it is successful it will be another valuable tool for getting more accurate science on leaching so that better models can be produced. She says it will help inform existing models such as Overseer which is widely used to determine and regulate nitrogen leaching on farms.

“The key will be to relate the images that the GPR sensor gives us to the other data we are collecting by soil sampling and by modelling to try to tie it all together so we can improve our understanding of the soils and improve our models and our prediction of where leaching is likely to occur,” she says.

Hedley’s paper was one of many at the workshop on applying new technologies to improve onfarm sustainability.