Are the water proposals a done deal? 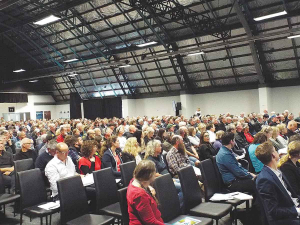 Farmers at the Mystery Creek meeting on water reforms.

Big questions have been raised by farmers at an environmental roadshow on the Government’s freshwater proposals.

What's the difference between a dairy heifer and a beef heifer?

It depends. Not a lot if you’re changing from a dairy to a beef operation, as it’s not a problem.

But a change from beef to dairy heifer rearing is demanding and will likely require resource consent as it’s likely to be considered intensification.

This question and many others were raised at an environmental roadshow at Mystery Creek, Waikato to get feedback on the Government’s freshwater proposals. About 750 farmers turned up, describing themselves as angry, mistrusting and fearful.

The presentation, led by MfE’s chief water policy advisor Bryan Smith, was to present the key objectives of restoring water quality in both urban and rural situations.

Smith said the intention is to put water first and the needs of people second. He used buzzwords like ‘holistic approach’, ‘mountain to sea’, ‘long term vision’ and ‘hierarchy of values’.

He said the aim is to reduce nitrates and sediment -- the levels of the former to 1mg/litre or less. And he conceded this might take a generation to achieve.

It will become mandatory for every farm to make an environmental plan for freshwater, created with the help of a third-party advisor and subject to ongoing audit.

Smith said detailed modelling had shown that good plans have potential to reduce sediment losses by 50 - 80% on typical hill country farms and 15 - 30% on dairy farms.

A proposal to create stock exclusion zones of 5m along waterways over 1m wide got the audience stirred up, as did mention of restrictions on winter grazing practice, already under fire from environmental lobby groups.  Feedlots and winter stand-off areas also came in for scrutiny, raising a suggestion of need for Resource Management Act oversight.

A long question and answer session showed farmers’ mistrust and frustration. Summarising this was dairy farmer Susan O’Regan, Te Awamutu, who said the common perception in the rural community is that the clear water proposals are intended as a legacy project for Environment Minister David Parker, and that he would likely pay little heed to submissions.

Matamata dairy farmer Wynn Brown questioned the proposals’ timing -- sprung on the industry at a very busy time on the farming calendar.

Said Brown, “I feel in my life at present, as a farmer, that the numbers and timeframes the Government is suggesting are like asking me to climb Mount Everest in my Speedos and swimming goggles.”

Andrew McGivern, Waikato president of Federated Farmers, summed up the Feds’ mood and tendered apologies from 49 members. He asked, “When were NZ waterways last in ideal condition?” citing 1950s research showing E. coli levels were then significantly higher than now.

During the Q+A session, John Penno, the chair of the Fresh Water Leaders Group, reminded the meeting that the discussion was of proposals only, then he addressed the need for certainty and a solution to suit all parties. He said similar discussions had stalled over the last five or six years and the need now is to commit rather than stonewall again, to avoid more uncertainty.

Further points were raised about the scientific studies done to confirm the efficacy of 5m exclusion zones, invasion of those zones by pernicious weed species and the shading of watercourses.

In closing, Graeme Gleeson, a sheep and beef farmer in the Freshwater Leaders Group said farmers should take things in their stride and accept that the monitoring of waterways is a good indicator of how environmentally sustainable farming practices now are.

Gleeson also noted that the policy recommendations do not compete with existing farm use, and he urged the audience to accept rather than “knee-cap” the suggestions. He also asked the audience to think as NZ Inc and as Team Ag in working together.