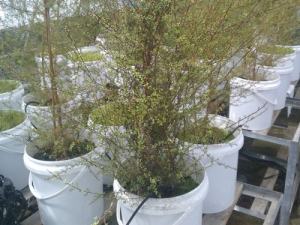 Four years of research in a greenhouse environment found the waste, which might include sewage and dairy shed effluent, can be used to rapidly establish native vegetation on former pine forest soils.

Early estimates suggest the natives could produce a financial return of over $200 million annually.

He says the research team have focused primarily on growing native species such as mānuka and kānuka, which can be used to produce valuable products such as honey and essential oils.

"Not only is this a great way of rapidly kick-starting low-fertility soil and a productive use of unavoidable waste which is currently disposed of either inappropriately or expensively, but in focusing on mānuka and kānuka, we can grow the market in products not easily adopted by overseas competitors."

Currently, around 1.8 million hectares of New Zealand soil is under pine plantations, says Lincoln University. This figure is decreasing, however, as there is little economic incentive to replant timber crops. Historically, pine forestry was an effective means of providing an economic return for low fertility soils, but this is no longer the case.

He says initial findings suggest the use of biowaste can significantly accelerate the growing capability of these soils by increasing the water and nutrient holding capacity, and providing essential elements.

It has also been found that, when used alongside pine waste and some charcoals, the leaching of nitrates is dramatically reduced.

These species have the added advantage of positively affecting the soil by producing antiseptic chemicals, which kill off pathogens in biowaste-amended soils, he says.

A Matamata truck wash business and a Hauraki farmer have both been convicted and fined over separate pollution events resulting from poor management of effluent infrastructure.