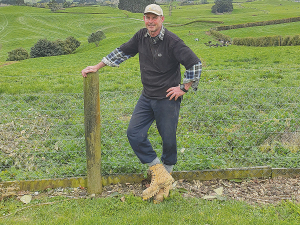 Farmer Brian Gallagher says the system in operation at the South Auckland now is seamless.

Seamless is how South Auckland dairy farmer Brian Gallagher describes the way the system allows him and his staff to cross the Auckland border weekly into the Waikato to look after stock.

Gallagher's farm is at Patumahoe, about 10 minutes north of Pukekohe where he runs 400 cows on a 125ha milking platform producing about 180,000 kgMS. He has run-off blocks at Glen Murray and Mangatawhiri on which he grazes 300 heifers. Both of these blocks are across the border in the Waikato region. For him the crossing points are at Mangatawhiri and at the golf course at Onewhero near Pukekawa. Normally Gallagher would cross the border once a week to check on the heifers and says the process to be able to do this has been easy.

"My good wife did the technology to get the exemption papers and we got these literally overnight. We have also got the Covid tracer app on farm," he told Dairy News.

Only Gallagher and his immediate family live on the farm - the rest of the staff live locally and commute daily to the farm. His system is unusual in that different teams do the morning and afternoon milkings and are contract milkers. He says he was operating this system before the arrival of Covid, but admits that now it works well in keeping staff safe.

"All staff carry the MIQ exemptions in their vehicles because they may need to cross the border. For example, if anyone is coming out of Waiuku at 5am and gets stopped, they have a copy of our exemption letter in their vehicle which says exactly where they are allowed to go.

"We have one staff member who milks at the weekend and she has to go through the border check to come to work. When the bar code on her exemption letter is scanned, it clearly states that she can only come to our place, but she also has to produce ID," he says.

Gallagher says the system in operation now is seamless and easy compared to the one last year, which was based at Bombay. He says he's encountered no problems at all and at worst there have just been three of four vehicles in front of him at the checkpoints - waiting time has been minimal.

In terms of the lockdown, Gallagher says it's had little impact on his farming operations. He says his bulk deliveries come from Mt Maunganui and the people who deliver this are vaccinated, have the necessary exemptions and codes and are tested for Covid as required.

"So, we have no problem getting in feed and other supplies. We are pretty lucky one of our supply merchants is based in Patumahoe and he can drop things off at the gate," he says.

Gallagher says the advent of Covid-19 has changed the way he and other farmers operate. He says his own family is fully vaccinated as are most of his staff. He says the emphasis now is on keeping family and staff safe and well.

"We have always been good at it this but going through winter we told our staff, if they had any indication that they were slightly unwell, we didn't want to see them on farm and we recommend they get a Covid test. We have made it very clear to our staff, if they don't feel safe coming to work on farm for their own reasons, don't come," he says.

Gallagher admits he's missed not being able to visit the local coffee shop during lockdown, but says on the brighter side, having a job in agriculture is a pretty good spot to be in.