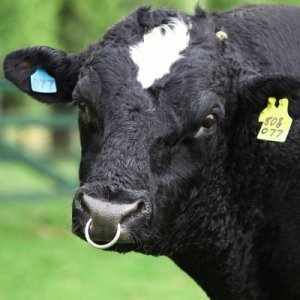 If taking dust baths and rolling around in the mud are your favourite pastime, you're bound to get pretty dirty. But for New Zealand's top ranked bull, LIC's Howies Checkpoint, it is also a great reason to be treated to the full spa experience.

New Zealand's number one artificial breeding sire, Howies Checkpoint looked his best on Tuesday as he strutted his stuff in front of some of the country's top bull breeders.

Checkpoint certainly seemed to enjoy the special attention given to cleaning behind his ears, the ear trim and power-shower, and pedicure, before strutting his stuff in front of hundreds of people during LIC's Premier Sires Breeders' Day in Hamilton (April 17).

LIC's Breeders Day recognises the contribution breeders of an elite 'band' of bulls have made to the genetics of New Zealand's dairy herd.

Checkpoint was among the more than 20 bulls from LIC's 2011/12 Premier Sires teams to meet their breeders and their families who had travelled from around the country.

Premier Sires bulls are responsible for siring three out of four dairy cows in New Zealand – contributing around $300 million each year to the economy, or more than $17 billion since LIC began artificial breeding .

Around 120 breeders and their families attended the special VIP day at the herd improvement company's Newstead headquarters.

"Premier Sires accounts for more than 70% of all the New Zealand dairy industry artificial inseminations carried out, and thus produces the next generation of high genetic merit, high performing dairy animals," says Wilson.

"With the dairy industry accounting for somewhere in the region of 40% of New Zealand's GDP our Premier Sires Breeders make a real difference not only to dairy farmers throughout the country but the country as a whole."

Premiers Sires is an artificial breeding programme unique to LIC, it's purpose is to provide farmers with teams of high Breeding Worth bulls. Premier Sires provide an economical, convenient way for farmers to breed high producing, fertile, easily managed, efficient cows, proven for generations to generate more income per hectare.