Business as usual at Mystery Creek 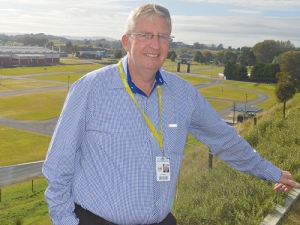 About 95% of sites at Mystery Creek were pre-sold by November last year; there is a waiting list of businesses keen to exhibit at the 2016 Fieldays.

Nation says the Fieldays has longstanding exhibitors, most turning up every year since its inception 48 years ago.

"They take the long term view; we all see downturns," he told Dairy News.

"They come here to to realign themselves with existing customers, and they come to show off their brands and show all their new innovation and products.

"We have 300-400 media people attending, so the exhibitors get great exposure.

"There is a whole lot of stuff going on here that is not visible; it's not just people standing a stand and doing a brand."

Nation says the Fieldays remains a melting pot for urban and rural dwellers -- the objective of its founders.

"We are focussed on keeping it real to its roots. When six people founded this organisation 48 years ago the founding objective was to bring town and country together and advance agriculture. We are careful to maintain focus on that."

Nation took over as chief executive this year, after 11 years as a board member. One of his first official tasks was to launch the Fieldays at a breakfast in April.

"For the last 47 years we have reached June and opened the gates after sending out a few media releases. This year we decided on a launch, to get people talking about it."

The four-day event opens on June 15.

Mystery Creek will be transformed into "a little city" for four days, he says.

About 10,000 staff will work at exhibition sites and the venue.

Tale of the tape