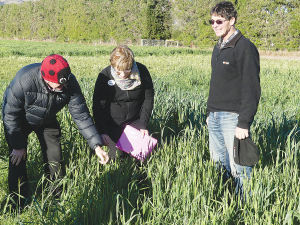 Scientists David Scobie and Robin Dynes with farmer Bill Wright (right) in a trial plot on his farm.

The key to using a catch crop to reduce onfarm nitrate leaching is to get it in the ground as soon as possible after winter feeding, says Plant and Food scientist Dr Brendon Malcolm.

Modelled on 25 years of rainfall data, the research showed that sowing a catch crop in June reduced nitrate leaching by 61%, 41% and 35% under low, medium and high rainfall scenarios respectively, compared with leaving the ground fallow.

But under all three scenarios the effectiveness dropped off progressively, to as little as 10%, if planting the catch crop was delayed to July, August or September.

“The modelling suggests here on average when we sow straight after grazing you get a 41% reduction. And you can see the longer you delay the lower the effectiveness of that catch crop,” said Malcolm.

The sooner the crop is planted the less the deposited urine is exposed to winter rain.

“The key thing is to sow the catch crop just after the urine is applied,” he said.

Malcolm also presenting findings of lysimeter tests which backed the value of early sowing, and other research showing that cereals were better catch crops than ryegrass.

Malcolm was among the key speakers at a recent field day on Bill and Shirley Wright’s sheep and beef farm at Cave, near Timaru, discussing the large Forages for Reduced Nitrate Leaching (FRNL) research programme.

The programme, now running for nearly six years and due to end in September, is funded by MBIE, DairyNZ and FAR, with financial and other assistance from CRIs and Lincoln University. Research has been done on nine monitor farms spread throughout Canterbury – four dairy, two arable, one arable/dairy, and two sheep and beef, one of them being the Wrights’.

Dr Robyn Dynes, who co-ordinates AgResearch’s involvement in the programme, said it started with the goal of a 20% reduction in nitrate leaching across all three sectors -- sheep and beef, arable and dairy.

She told the field day nitrogen was a critical biological cycle. Inputs were fertiliser, clover and feed, and outputs were milk, meat and the feed that goes off a farm.

“If we feed in excess of what they need most of it ends up in the urine and that’s where most of our nitrate leaching comes from.”

Nitrogen deposited in urine is available to be captured by plants and it costs dollars if it’s not, she said.

“So we’re all in behind how we do more with what we put into our system -- reduce our inputs, increase our outputs and reduce our nitrogen surplus.”

FRNL had started looking at a lot of options but quickly focussed on the three that showed the most promise -- fodder beet for winter feeding instead of kale because of its lower nitrogen content; plantain, which increases N uptake, dilutes N in urine and also appears to have a suppressing effect on nitrification in the soil; and catch crops.

Dynes said most of the dairy monitor farms are now growing fodder beet on their platforms. Plantain has also become a big focus for dairy farms although it is difficult to maintain the optimum plantain percentage in the sward.

Dynes said the 20% reduction goal had proven difficult on the Wrights’ farm in part because they are already leaching at very modest levels.

The challenge for a sheep and beef farm is that it is stocked and managed to utilise the feed that they grow and they don’t bring in lots of nitrate as fertiliser or supplements as dairy farms do, she said.

“So if they remain as livestock farmers, their opportunity to reduce leaching is quite limited.”

Catch crops had not made a big impact on the Wrights’ heavier soils but would potentially do more on the lighter and more freely draining soils.

However, the Wrights had “picked up and run with” a number of approaches and shown they can get more production at the same nitrate leaching, primarily by using high quality feed and finishing animals faster.

Dynes told the field day attendees that the monitor farms invited to take part in the FRNL made sure the science was being questioned in ways that made it relevant to farming.

“We want you to leave today feeling no fear for the environmental challenges we’re all facing because we think there’s huge opportunity for all of you to do more with less. And you’ve proven time and again your capacity to do that when the signals are right.”

Plantain could be incorporated into Overseer as early as September, says Overseer chief executive Caroline Read.

Workshops and discussions with the Forages for Reduced Nitrate Leaching (FRNL) programme scientists have begun.

Proposed methods for including plantain, fodder beet and catch crops would be developed using collaborative software to make the process as transparent and inclusive as possible.

“We want to be in a position by [September] to at least introduce plantain if not the other two,” she said.

Fodder beet is already in Overseer but new data from FRNL will be used to update some of the characteristics.

“And we want to be able to represent catch crops. We know that will be really helpful for that winter risk period,” said Read.

“The FFRL project has helped get us to a point where we actually understand what needs to change in Overseer so that’s been very helpful.”