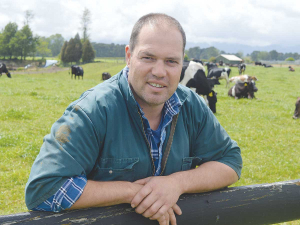 The new chairman of the Fonterra shareholders council, James Barron, is energised by the work lying ahead.

The fourth generation Matamata farmer took over this month as chairman, elected by the 25 councillors after a two-way contest.

His chairmanship comes at a crucial time. Fonterra has just posted its second year of net loss and the co-op is embarking on a new strategy to turn the business around.

Barron sees the year ahead as an opportune time to have “engaged and informed discussions” among shareholders on the role and functions of the council.

He stresses that it’s not the council reviewing itself.

“It’s a council-initiated review rather than a council-led review,” he told Dairy News.

A steering committee of councillors, Fonterra directors and shareholders will draw up the terms of reference of the review. It will have an independent chair.

At Fonterra’s annual meeting this month, Barron committed to the review within 12 months. And it must be timely, he said.

“So that we can move forward together. The process has started and there will be plenty of milestones along the way.”

The council will invite shareholders to express their interest in serving on the steering committee. At Fonterra’s AGM, two remits were put forward by groups of shareholders calling for an independent review of the council, but neither remit reached the 50% threshold to pass.

These remits weren’t supported by the council or Fonterra’s board.

Barron says the remit from Southland farmer Tony Paterson contained conclusions drawn from the outset, including commentary on “council inaction and suffering from board’s influence”.

“Whereas our position is that we want the steering committee to set the terms of reference and we will move forward without any foregone conclusions.”

Barron points out that about 44% of shareholders who voted supported Paterson’s remit. With voter turnout under 50%, only 25% of Fonterra’s shareholder base were backing the remit.

Barron says the council would not ignore the views of these shareholders.

“We have got a group of shareholders really keen to engage and have robust discussions. We will ensure they are given this opportunity in the next 12 months.”

“That’s the reality of being part of a 10,000 strong co-op. We are a diverse group of owners with a diverse set of viewpoints.”

James Barron is a fourth generation dairy farmer milking 450 cows on the 140ha dairy farm where he grew up.

After leaving school he earned a BCom at Canterbury University, worked in real estate and travelled -- snowboarding in Canada, kayaking in Africa and three years in the UK with his now-wife Holly.

He went straight into farming on his return to NZ, starting as a farm assistant, then contract milking and sharemilking, before buying the farm the family has owned since 1933.

James and Holly, who is a lawyer, have three children aged 8, 6 and 4. They all enjoy being part of their vibrant rural community.

James joined the council three years ago, seeing it as a way to contribute to the ongoing success of the co-op. He is passionate about the cooperative model and wants to see it endure for generations.