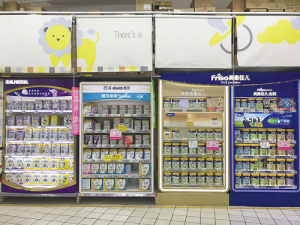 A Chinese supermarket with prominent brands of infant formula: no sign of Fonterra’s Anmum.

Li says Beingmate was trying to offload the brand slots in order to can infant formula on behalf of other clients at the company’s manufacturing sites in China.

“Beingmate will only keep two-three brands for themselves because they think it is impossible for them to manage more than three.

“Does Fonterra know this new direction? I honestly do not know. But I think the question should be raised with them. If they don’t know, then why not? If they do, have they told this to their farmer shareholders?”

Li and her Kiwi partner Simon Page are the brains behind the successful NZ Milk Bar corporate stores in China, operating since 2012. They also owned the Biopure Health infant formula business which they sold last year.

She is also a senior China analyst for Auckland-based World Civilisation Forum, an independent organisation “facilitating better understanding between China and the rest of the world”.

Li, who is in China this week, says Anmum is a great brand but it is failing to make inroads into the Chinese market. She blames an uncompetitive price structure and poor marketing.

“We went to a Carrefour supermarket; every big brand, such as Mead Johnson, Nestle, Abbott all have their own dedicated shelf bays, with their branding, design…. Illuma which belongs to Wyeth even has their own salesperson.

“Anmum by comparison has six tins at the end of a shelf: two tins of pregnant formula and four tins of stage 3. Stage 1 and 2 appear missing, maybe out of stock.

“All of the formulas next to Anmum are Beingmate brand. You can also see Mead Johnson’s bright branded bay in the same aisle as Anmum and Beingmate.

“This is what a lack of competiveness looks like and it illustrates the concerns Beingmate was trying to raise on lack of brand building and support compared with other major brands in the market.”