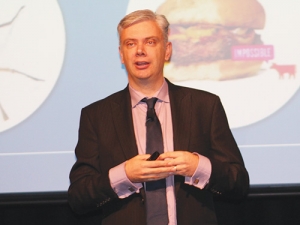 "They won't be coming into the dairy market to be number eight or nine – they will want to be number one," he told the NZ Veterinary Association conference in Hamilton last week.

"Coke bought Fairlife, one of the most innovative liquid dairy companies around."

KPMG has surveyed 80 global agribusiness companies on trends in food and agribusiness and Proudfoot says change is coming very rapidly. We are on the cusp of a "fourth industrial revolution".

"The biggest change we will see are pharmaceutical companies. Their interaction in the agricultural sector has historically been relating to selling drugs to vets.

"Now they are thinking about how they become producers of food – or at least nutraceuticals – that have health benefits. That step is coming very quickly: they are innovating a lot, they are spending huge money on how they will bring their skills in pharmaceutical products and apply them to food."

For example, Lewis Road Creamery, "which created riots in Remuera over chocolate milk", is telling a story, he told the vets. "Their story tells how their food is being produced from their farm through to the consumer, and how the animal producing the milk is being looked after."

Proudfoot told the vets of their importance in that story because they are in that value chain. They help the farmer create the story, which creates the value in the product.

Things are changing very rapidly in food, he says. Biological, physical and digital technologies are creating "a whole heap of new solutions, different ways of doing things, different opportunities for your businesses and for the clients of your businesses.

"We are on the parapet of a financial/cultural revolution," Proudfoot says.

NZ is not grasping the climate change issue nearly as much as other countries, he says. "The shift to low carbon economy is really gaining pace, as is food safety. That is probably most important for your industry."

Importantly, KPMG notes that though NZ has succeeded as a nation -- growing magnificently and achieving high productivity -- "what we do today will not be enough to get us where we need to be tomorrow; we need to innovate and change".

"We will have new forms of farms. We will have people farming in different ways from the way they farmed historically."

A farm may in fact be a 22-storey office building. Green Centre Farms, in Chicago, farms in a 22-storey building. They grow beautiful salad vegetables, all organic: this could be the farm of the future, Proudfoot says.

"People are doing horticulture and agriculture in the same building – different ways of integrating the business.

"We will find different ways using drones. It's not going to be one drone; it's going to have a swarm of friends.

"If you suddenly have 25 drones on a farm you can do a whole heap of stuff – you can lift, spread, muster and gain a huge amount of data."

There will be different farming models. Philadelphia Cow Sheds is a great example of that, crowd-sourcing an interest (share) in the animals.

Think in step with consumers

We can't ignore the gamechangers; they are coming and quickly, says Ian Proudfoot.

He outlines a wide range of consumer changes and referrs to onfarm issues.

"Antimicrobial resistance is growing more important. We need to... be able to tell the world our food is free of antibiotics. Consumers want that and it is valuable," he says.

On the environment, the conversation is changing; it has been, 'we are looking after the environment because the law requires it'; but now it is becoming 'this is the right thing to do'.

"We cannot ignore social issues: 14% of the food we produce globally is wasted; this needs to be reduced, right through the value chain.

"Animal welfare: we got caught on this last year – caught in a big way. We need to address these issues and do what is right because it is the right thing to do."

Proudfoot says we produce a very small amount of food, directed by the goal of selling it to very high-worth customers.

In NZ we produce beautiful food for the world to pay us a premium to eat. The challenge we face is, have we got the positioning right to capture that?

"We need a paradigm shift; the opportunity is massive, we've just got to capture it."

Fonterra’s board is flagging a number of key changes to its proposed new capital structure following farmer feedback.