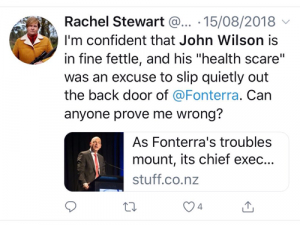 A New Zealand Herald columnist, who questioned the retirement of former Fonterra chairman John Wilson in July last year, is facing calls to apologise to his family.

However, columnist Rachel Stewart tweeted at the time that she didn’t buy Wilson’s reason for leaving the co-op and is now coming under fire on social media.

“I’m confident that John Wilson is in fine fettle and his ‘health scare’ was an excuse to slip quietly out the back door of Fonterra. Can anyone prove me wrong,” she tweeted on August 15.

On Twitter today, Stewart is facing calls from farmers and industry leaders to apologise and admit that she got it wrong.

And I hope people who questioned the retirement of John Wilson from @Fonterra’s chairmanship think next time before they cast judgement on things they have no personal knowledge about. The reasons given are usually the reasons. pic.twitter.com/asdnJZVtjr

Even respected NZ Herald business writer Fran O’Sullivan commented on Twitter; “Vale, John Wilson. Took at lot of mean-spirited comments when he stood down as Fonterra chairman, His loss today will be felt throughout the dairy industry.”

Vale, John Wilson. Took at lot of mean-spirited comments when he stood down as Fonterra chairman, His loss today will be felt throughout the dairy industry.

Farmer Dean Rabbidge called for her to be blacklisted from writing for media outlets.

Class is something that @RFStew does not have and never will, I really hope that every media outlet in the country uses this vile comment to blacklist her from contributing ever again.

Farmer Craig Douglas said it was a good time for Stewart to make her apology.

Nasty Rachel Stewart - so quick to ignorantly bad mouth John Wilson on Twitter.
Now is a suitable time for your public apology on the same forum.
Disgusting! pic.twitter.com/5SX1EUNklp

Stewart, who has a history of causing controversy with farmers, did respond with a tweet today.

Turns out John wasn't in "fine fettle" - but neither was Fonterra at the time. Before his deification gathers full steam, who do I make my unreserved apology out to? pic.twitter.com/9pJ0ibGVTb