Cool milk faster and save on power costs 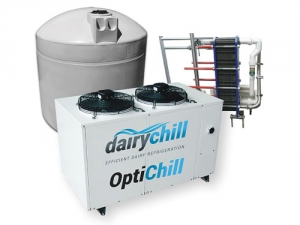 Pending regulations on cooling milk are prompting many farmers to look at upgrading or replacing their chiller systems.

ACR Agri Ltd, Hawera, whose equipment can lift the performance of dairy refrigeration units, says some farmers will need to upgrade their chillers or risk not having their milk collected.

The company offers milk chiller systems that cool milk efficiently and save up to 80% of the power usually required for this task.

"These are based on cooling the milk faster and saving on power," the company says.

Greater chiller efficiency is obtained with ACR's DairyChill Enersol Boost system which sends water at 85 degrees C to the vat. The system can be fitted to new or existing sheds and will increase the lifespan of the existing chiller unit, the firm says.

Under the new specifications raw milk must:

According to MPI, milk collected from a farm must be cooled according to new rules or it will likely not be collected; it would then have to be dumped.

Research shows that cooling consumes about 30% of the total energy in operating a dairy. Meeting the new specification may markedly reduce energy costs.

"This isn't a case of 'going broke to save money'; it really works the chiller unit to its maximum ability."

• The DairyChill Enersol Boost system which ensures that hot water enters the cylinders at 85 degrees, for new or existing sheds.

• OptiChill, which ensures that milk enters the vat at 8 degrees C in one pass. This is claimed to save 50% on power over the standard chiller unit and electric water heating.

• CoolJect Plus+ is a system which involves replacing existing thermal expansion valves with valves which are electronically controlled. The chiller fans are also replaced with long-life electronic fans.