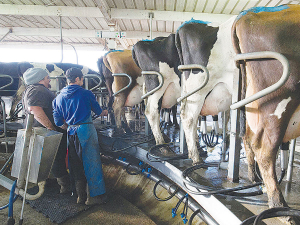 Farmers have had months to prepare for the pandemic, says DairyNZ.

Some dairy farmers, their families and workers, have contracted Covid, according to DairyNZ's general manager for the farm performance team, Sharon Morrell.

She told Dairy News that some DairyNZ events have had to be cancelled because a person on the host farm has contracted the virus. But she says there is no sign of a crisis around Covid on farms at present and it appears that farmers are coping well with the situation.

"The good thing is that we had some months to prepare for that and DairyNZ has worked hard to get farmers to be proactive... and communicating with neighbours about whatever their contingency plan looks like.

"We have seen farmers developing these and we have been running webinars and actively messaging farmers about this issue. We also have a lot of information on our website," she says.

Morrell says the fact that the season is slowly drawing to a close is working to the advantage of dairy farmers. However, she points out that because of the good payout, farmers are trying to milk for as long as they can and are feeding out in some regions where it's been dry.

"There are still busy people out there harvesting maize and doing other work so there is definitely activity on farm. But it feels less critical when it is manageable in your mind, that's a help," she says.

According to Morrell there doesn't appear to be any major supply chain issues, with the exception of the meat processing works, which are operating at reduced capacity. She says farmers are being urged to book space early and have a good plan for getting rid of cull cows.

"The other thing thing we are urging farmers to do is to create a robust feed budget.Not just an autumn budget but thinking right through to spring and thinking about the next season," she says.