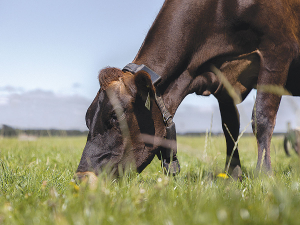 Halter replaces break fencing with GPS mapping, and trains cows with solar-powered collars to tell them when and where to move, by way of audio beeps, tactile buzzing and ultimately electric shock. It also monitors their activity for early warning of any problems.

Morgan said that any worries of harm were outweighed by the good the system does in terms of monitoring and early intervention on animal welfare, farm efficiency and staff experience.

People outside the industry worried about dairying's social license "quite rightly" question the electric shock, but it's not a big jolt and only a last resort.

"The negative reinforcement is not to punish them but to reinforce a command that they already ignored," he said.

"The pulse that you get from it I've had many times - it's a tiny fraction of an electric fence and they get plenty of those."

McDougall said cows all know they will get a belt from an electric fence. "So what we're doing is replacing that physical cue with an audible ue and a vibration cue before they get the electric. So it is a step-up thing, it's not like they're getting slammed with a high voltage.

"They are getting the signal, they're trained, they learn and so it it's stepping up the response to get the behaviour that they've learned.

"It's nuanced, they learn. They're smart animals, they get it," said McDougall.

Morgan said the system had the capacity to understand the behaviour of every single cow and what cues she needs. Unlike the one-size-fits-all inflexibility of an electric fence, some cows were comfortable in crossing a virtual fence for short periods knowing they would soon need to wander back.

For example, a worked on a quad bike coming up behind a herd to hurry them towards the shed will be forcing those lowest in the pecking order to push into those ahead, stressing them out and maybe prompting them to misstep and injure themselves. Cows in a Halter herd could pace themselves and respect the pecking order.

In a keynote address to the event, the general manager of Ngāi Tahu Farming and Forestry, Will Burrett, said Ngāi Tahu adopted Halter in a "leap of faith" by the board and management, but now has Halter collars on 25% of its 8,000 dairy cows. "I tell you what the functionality of what we're seeing out in the paddocks, the pasture utilisation, allocation accuracy perspective is really exciting."