Danone threatens to pull out 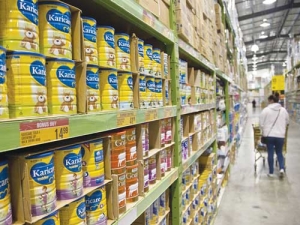 Danone Nutricia says if Fonterra stops supplying raw milk under DIRA, it may consider pulling out of New Zealand.

Danone Nutricia says it would have to consider leaving New Zealand in favour of countries with more suitable raw milk markets if dairy regulations are removed.

In fact it wants to see the time period Fonterra is required to supply milk to an independent processor expanded from three to five years.

The removal of regulations – particularly those pertaining to raw milk supply to other companies and farmers’ entry and exit provisions – would impact Danone Nutricia’s ability to expand and it would have to reconsider its future development in NZ, it says. The Danone Group has factories in Europe, including Ireland, from which it can source competitive dairy products for the NZ market, the company says in a submission.

Owned by Danone, its Paris-based parent company, Danone Nutricia NZ Ltd manufacturers the Karicare range of formula for infants and toddlers from its two blending, packaging and canning facilities in Auckland. The comments were made in submissions to the Commerce Commission.

The commission is reviewing the regulations under the Dairy Industry Restructuring Act. Fonterra has submitted that it should no longer be required to provide raw milk to independent processors after 2018 or be required to collect milk from all suppliers.

Danone Nutricia considers that it is of “paramount importance” to retain the current regulations relating to:

Danone Nutricia is planning to invest in its NZ operations over the next five years, its submissions says. It sees the regulations applying to Fonterra as critical to support this growth.

“The proportion of milk collected by Fonterra has reduced from its inception to around 87%,” it says. “However, despite a reduction in the percentage of raw milk collected, it is still a very high proportion by global standards. In addition, in terms of total volume, Fonterra has reached a level far beyond the volumes produced in the early 2000’s.

“As a result, Fonterra has retained or achieved a dominant position both domestically and in worldwide markets.

“As a result of Fonterra’s dominant position domestically at both the farmgate and the factory gate, it is generally able to dictate market conditions.

“This is especially the case in remote areas where there is little or no competition. Indeed, while there are now some regions with competition where the farmers can opt for a supplier of raw milk other than Fonterra, there are a number of regions where there are still no alternatives.

“Furthermore, NZ raw milk markets are not competitive when viewed from a global perspective. For example, in Germany, the national competition authority (Federal Cartel Office (FCO)) conducted a sector inquiry into the milk and dairy industry in 2011-2012 and published a very comprehensive report with its findings.

“The FCO states that no milk purchaser has a dominant market position in any of the regional markets in Germany, though at the time market dominance was presumed under German law whenever market shares exceeded 33%.

“However, the FCO is still very concerned about “relatively strong” market positions and long-term contracts as well as a high degree of market transparency. Until Fonterra’s market share is materially reduced, there will continue to be little opportunity for meaningful competition for the collection or distribution of raw milk.”

The current dairy regulations enable a degree of workable competition in dairy markets, Danone Nutricia says. Of utmost importance are the obligations on Fonterra in respect of exit and entry of farmers to and from Fonterra, provision of raw milk to independent processors and default milk pricing.

Danone Nutricia says these regulations have enabled the independent supply to its Balclutha facility and sees them as critical to its continued growth. “The entry and exit provisions will allow Danone Nutricia to compete for supply from farmers within the region around its facility, while pricing regulations make pricing more transparent and mitigate tactical overpricing of milk by Fonterra,” it says.

“As an additional consideration, although these regulations appear to be satisfactory for an established business (such as Danone Nutricia) to obtain raw milk supply, it appears unclear whether they provide a sufficient avenue for new entrants.

“Indeed, the three year exception to the right to obtain raw milk from Fonterra does not appear to be long enough for a new manufacturer to establish its reputation.

“In order to improve the current regulations so that new entrants are able to compete, Danone Nutricia considers that exception to the right to obtain raw milk from Fonterra should be extended to five years.”

The removal of the dairy regulations would have a negative impact both on Danone Nutricia and other manufacturers of dairy products in New Zealand, Danone Nutricia says.

Without the dairy regulations Danone Nutricia considers that Fonterra will:

(a) seek to contract with farmers for long periods (eg 5 years+) particularly in areas where it considers competition is likely; and

(b) leverage its position in the market to absorb the balance of farmers’ raw milk supply which is currently allocated to independent processors (using targeted tactical pricing, long contracts, etc.).

As a result, Danone Nutricia and other independent manufacturers may be precluded from acquiring new sources of milk supply, it says.

Furthermore, these tactics will create potentially insurmountable barriers to new entry, enabling Fonterra to solidify, or even grow, its dominant market position.

“For example, Fonterra’s latest marketing initiative, “My Milk”, offers farmers the option to sell their milk without being a shareholder. Such initiatives could be used specifically to target farmers supplying independent processors with targeted pricing or supply conditions,” says Danone Nutricia.

“In terms of downstream markets, deregulation would give Fonterra a huge competitive advantage linked to its dominant position upstream. Absent regulation, with 87% of raw milk collection locked up by Fonterra, downstream competitors would be dependent on the willingness of Fonterra to supply them by its own choice.”

In conclusion Danone says Fonterra’s dominant position in NZ’s raw milk markets has not yet resulted in meaningful competition developing. Should the dairy industry be deregulated, Danone Nutricia and other independent processors of raw milk would have significant difficulty obtaining sufficient raw milk supply at competitive prices. The likely result would be reduced competition in downstream dairy product markets and upstream (i.e. farmers will not be likely to want to supply independents). Accordingly, until Fonterra’s market dominance is addressed, the dairy regulations should either be kept as they are or tightened.