Dream comes true for the Woodwards 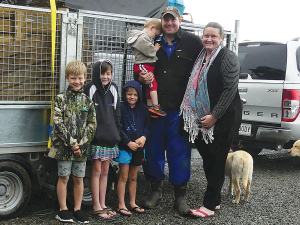 This year's Gypsy Day marked the realisation of a dream for former Canterbury sharemilkers Michael and Susie Woodward. They are now proud owners of a 170ha farm at Otorohanga, 45 minutes southwest of Hamilton.

The change meant a huge logistics exercise for the couple and their four children. It took a large transporter for the tractor and other farm machinery, two SUVs with trailers loaded to the gunwales for the family and relays of trucks for the livestock.

The couple have been sharemilking about 1000 cows for Purata Farms just south of Dunsandel, but have pared back for the new farm, choosing to keep only their best A2 tested animals.

They took 250 dried off cows, 100 in calf heifers, about 60 empty carryovers, 16 bulls plus 50 Angora goats. The rest of the herd was sold to buyers in Oamaru and Southland.

Susie Woodward said the only machinery they took when moving to Dunsandel was motorbikes. The move to Waikato was “not straightforward” but getting their own farm was worth the pain, she said.

“There have been a few challenges along the way,” said Michael, “But keep the end goal in mind and we’re just about there.”

His move somewhat returns him to his roots, since he was raised on an Angora goat farm two hours north of the new farm. They recently established their own Angora herd and hope to build that side of their business to complement the cows.

Woodward says the new farm consists of three older farms pulled together over time. About a third is flat, a third rolling and a third steep.

“It’s definitely got a bit more character than some of the Canterbury farms.”

Being fully self contained enables them to winter all stock on farm and to adjust cow numbers to fit the goat side of the business, he says.

“Maybe that [Angora] ramps up but we’ve got to make sure we keep the bank happy,” he says with a grin.

The farm has a 27-a-side herringbone shed with inshed feeding and a shearing shed for the goats.

They will be supplying Synlait’s new Pokeno plant.

Meanwhile, Woodward has resigned as Federated Farmers North Canterbury dairy chair but hopes to get involved again in Waikato once they’re settled in.

He remains chair of the New Zealand Dairy Industry Awards and Susie will continue on the Mohair NZ producers board.

Although milking a smaller herd than they’re used to, the Woodwards plan to milk only once a day for a “lower input, lower stress” system. On their self contained farm they expect a lot of drystock work and they intend devoting a lot of time to their four children.

“We might not be milking in the afternoon but we’ll be busy,” says Michael.

Top tips for a smooth move

As an estimated 5,000 dairy farmers prepare to pack up and move to new farms for the June 1 start of the new season, DairyNZ is providing practical assistance to help make the move safe and easier.

Ag minister Damien O’Connor is hailing “great cooperation” right across the agriculture sector that led to a successful outcome for Gypsy Day or Moving Day on June 1.

Plan ahead for better outcomes

OPINION: A feed shortage or poor cow condition come May 31/Gypsy Day doesn’t happen overnight and in a well-run business there should no end-of-season surprises like that.

DairyNZ is urging farmers to offer their input on Moving Day by this Sunday.