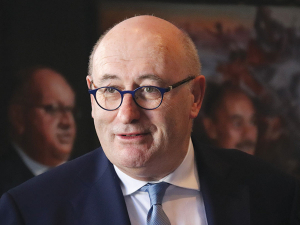 An influential European Union diplomat is optimistic that a quality free trade agreement (FTA) with New Zealand is possible before the end of 2019.

Hogan, an influential official, is responsible for the agricultural dimension of any FTA negotiated.

He told Dairy News that progress is good in the negotiations; three more formal rounds are scheduled up to the mid-year.

“I am optimistic that not only can we do a deal, but a quality deal,” he says.

Hogan, from a family farm in Ireland before entering politics, says agriculture will always be a sticking point with NZ because it is a sensitive issue with European farmers. But he is confident a deal can be negotiated and that 98% of the tariffs and other impediments to trade can be lifted, leading to greater trade liberalisation.

Two major issues are of concern to NZ: tariff rate quotas (TRQs) which affect access of sheepmeat to the EU and the UK, and geographic indicators (GIs) which mainly affect the dairy industry.

Hogan says TRQs are more related to Brexit and are an issue for the World Trade Organisation (WTO)  to deal with. And the issue of GIs can be resolved. An example of a GI is the name given to a particular cheese such as gouda, which refers to a specific town or region.

“Geographic indicators I suppose can be described as rural intellectual property in the EU. They are well accepted [in NZ] in the wine industry but I know there are one or two names in the dairy sector that we are worried about; but I think we can resolve those.”

On a positive note, Hogan refers to a great deal of goodwill at the FTA negotiating table.

“It would be unthinkable in an era of so much global disturbance on many issues, that the values and objectives of like-minded countries like NZ and the EU couldn’t bring about a deal.

“If Mr Trump wants to remain protectionist we have to remain open for business and we are strong supporters of the multilateral trading system. As a result of this I think NZ and the EU will come to an agreement.”

Phil Hogan hopes Brexit will end up as an ‘emergency landing’ rather than a ‘crash’.

This depends on whether British politicians can reach agreement by the end of March, when Britain is scheduled to leave the EU.

“When you read the papers it doesn’t look like it’s going to happen, but I remain optimistic that some deal will ultimately be reached. It would be unthinkable for UK industry, agriculture, jobs and financial services if Britain crashed out. It would be a major blow to them.”

Hogan says the UK Prime Minister, Theresa May, understands the Irish backstop issue which is proving to be a major sticking point in the negotiations. But he says the behaviour of some ‘leave’ campaigners in the House of Commons shows a lack of interest in the fragile peace in Ireland.

“The island of Ireland needs to be protected from the worst excesses of Brexit,” Hogan says.