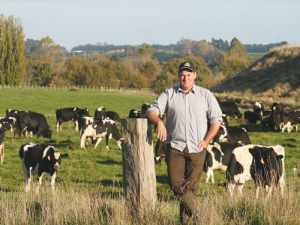 He says this past year has been pretty tough for farmers and everyone has dug deep to get through it, a few people dropping out because the going has got too hard.

“But it’s not only the payment side of it, but all the SAFEs and Greenpeaces who have put the boot into us. Everyone seems to have nitrogen myopia when it comes to water quality. They seem to forget that phosphates and E.coli and sediment are also problems that can occur in waterways. We have been under a siege mentality for the last year. But the payment side of things is looking positive.”

In an attempt to counter negative criticism Hoggard says he’s made a point of getting on the front foot by telling the public the true story about the dairy sector. Much of the criticism is due to the expansion of the dairy industry, he says.

“Dairy has done well and this has had an impact to some degree. I don’t know if the criticism was unjust, but certainly the level of it was.

“I get annoyed that the good things dairy does don’t get recognised. There has been a concerted effort by farmers to mitigate things and the industry has improved the situation and it would be nice to occasionally get some credit for that.”

Hoggard says most New Zealanders have some understanding of dairying’s contribution to the economy, but he acknowledges it is hard for someone in, say, retailing in a city to think about the value of dairying.

Various mayors of Palmerston North, near where he lives, have said that if dairying was to go the local economy would be severely impacted.

Looking back on the last two years of low farmgate milk prices, Hoggard says dairy farmers should learn from this, especially the pressure of excessive debt.

“Farmers must budget on the fact that the industry will be up and down, and structure their businesses to meet that.”

They must also consider the environment, animal welfare and treating their staff well.