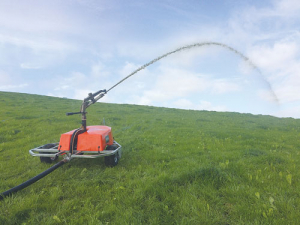 This was revealed in the council’s response to a Forest and Bird (F&B) report which gave Waikato an ‘F’ grade -- the worst in the country -- for its compliance monitoring.

But the council has also revealed that aerial inspections were part of a more risk-based monitoring programme the council adopted in June this year.

“Our new way of monitoring has only been in place for just over a month, and it is targeting high risk farms,” says farming services manager, Nicole Botherway. “That means it’s not surprising we’re picking up higher levels of non-compliance than we were previously, but it’s too soon to tell if this trend will continue.”

The council in 2014 stopped aerial monitoring after farmers complained of feeling intimidated and intruded on.

But the council says announced visits enable staff to meet one-on-one with farmers to discuss their farm matters including minor earthworks, the Healthy Rivers/Wai Ora plan change and water consents.

“Now a significant portion of the farming population have or are attempting to improve their systems, and working with them one-on-one has helped,” says resource use director Dr Chris McLay.

LGNZ’s regional sector is working with the Ministry for the Environment to develop a national system to enable regional council compliance, monitoring and enforcement practices to be compared between regions.

Each council monitors and enforces according to the conditions of a resource consent and the planning approach taken is specific to its region.

“A national reporting methodology will provide a much better platform for comparing data across different regional councils, and will take those differences into account, so we’ll be able to compare apples with apples.”

The methodology used by the Forest and Bird researchers has led to inaccuracies in the report which could have been avoided by engagement with the sector, he says.

Misinterpretation of the Waikato Regional Council’s data implied significantly non-compliant farms had not been visited for 10 years. This did not take into account the council’s aerial monitoring done before 2014.