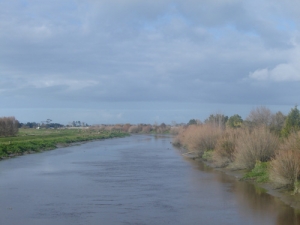 The efforts of farmers to improve the health of the Piako River in Waikato region have been recognised.

The efforts of farmers to improve the health of the Piako River in the Waikato region have been recognised.

The award of the Waikato region's most improved river to the Piako River follows a significant effort by farmers in the catchment to lessen the environmental impact of their operations, says Waikato Regional Council chairperson Paula Southgate.

"This work by farmers, landowners and industry groups in both the Piako catchment and other parts of the region, is crucial to improve the health of our precious waterways, lakes and groundwater, and should be celebrated," she says.

The foundation noted that the Piako catchment is dominated by pastoral farming - mainly dairying and stock finishing. The water quality monitoring site is downstream of Morrinsville and the town's wastewater discharge to the river, and a number of dairy company discharges also. The river flows out past Ngatea to the Firth of Thames.

"The Piako catchment is 95% pasture. It is one of the most intensively farmed (dairy) areas in New Zealand and always has been. Council records confirm ammonia and nitrates levels in the river have declined over the past 10 and 20 years. Improvements in dairy shed management practices have contributed to the observed improvement in water quality," the foundation said.

It noted dairy farmers have increasingly moved away from dairy shed oxidation ponds towards discharging treated effluent on to the land. The oxidation ponds had discharged into the nearest drain, and thus contributed ammonia and nitrogen to nearby waterways.

"Across the Waikato only five per cent of dairy farms now have oxidation ponds so the era of easy wins...is now probably over," the foundation said, adding that the source of 70% of nitrogen is from cow peeing in the paddocks "so further improvements are going to rely on changes in farm management practices".

Southgate says the council is working closely with the farming community and others in a variety of ways to lessen the sector's impacts on waterways, while potential regional plan changes to protect them were either being formulated or in the pipeline.