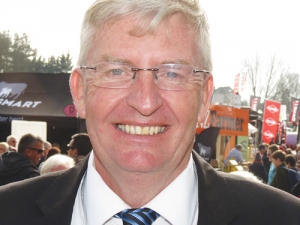 Farmers needed to take time out from their day-to-day demands and worries and get to Kiwi farming's supermarket. "It's even got aisles," he quipped.

"You don't want to sit too long in the place that's causing you stress. So the idea was to get them off-farm.

"Fieldays has lots of seminars that provide farmers with new information and stories to help them start thinking positively.

"It's also a time for them to come and talk to people and feel the big support mechanism behind them.

"It pleases me that the exhibitors and suppliers keep investing here. Farmers should be buoyed by people continually putting investment in behind them," Nation says.

A big part of National Fieldays unseen by most is that many people come to socialise. During his days as a farmer he did this, he says.

"I've pulled myself out of bed in Taranaki at 3am and driven to Fieldays and had breakfast – sandwiches and a Thermos of tea – out of the boot of the car and met our friends from Bay of Plenty. Today you see people doing just what we did," he says.

The social culture of Fieldays is important to farming families: it's their chance to meet friends and suppliers and build new relationships. This has always happened, even in tough times.

And even in tough times exhibitors keep on at Fieldays and while they may downplay the nature of their site they realise how important it is to keep faith with their customers.

"You don't want to be a fair weather friend; you need to show your support of the industry especially if you are a big brand. Farmers expect their suppliers to be here and it would be considered rude if they weren't here."