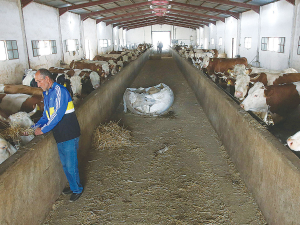 DSM claims Bovaer, soon to be available to EU farmers, consistently reduces these methane emissions by around 30%.

Bovaer, developed by global science company Royal DSM, was evaluated under Australian feedlot conditions and found to reduce methane emissions by up to 90%. The additive is a synthetic chemical compound called 3-NOP.

In New Zealand, Fonterra is trialling Bovaer under a joint partnership with DSM.

Trials overseas have shown Bovaer reduces methane emissions by up to 30% in non-pasture raised cows.

Last month, the European Union approved marketing of Bovaer in the bloc after Bovaer went through a stringent scientific assessment by the European Food Safety Authority.

The authority concluded that Bovaer is "effacious" in reducing methane emissions by cows for milk production.

Once the decision is adopted by the European Commission, expected in the coming months, the feed additive will be the first of its kind available on the EU market.

Bovaer has already been approved for use in Brazil and Chile. A commercial launch in Australia is also expected this year.

DSM says the dairy industry has an important role to play as enteric methane from dairy cows is responsible for up to 60% of the global greenhouse gas emissions from milk production. It says Bovaer consistently reduces these methane emissions by around 30%.

“And ultimately it enables the consumer to purchase sustainable dairy.”

“We are extremely proud that, after a decade of research, trials, and value chain collaboration, its potential has been recognised with this historic market approval.”

Dimitri de Vreeze, also co-chief executive of DSM warns that there is no time to lose when it comes to tackling climate change.

“We look forward to introducing Bovaer to the European market where we know farmers and dairy companies share our eagerness to act.

“This solution enables us to work together to offer consumers dairy products with a greatly reduced climate impact.”

According to DSM, Bovaer is a feed additive for cows and other cattle and ruminants, such as sheep and goats.

The production has been researched and developed over ten years by DSM. The company claims that just a quarter teaspoon of Bovaer per cow per day reduces enteric methane emission by approximately 30%.

DSM has filed the feed ingredient for commercial registration under the trade name Bovaer around the world.