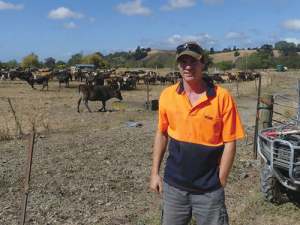 Michael Shearer says drying off early means a production loss of about 40,000kgMS.

Sharemilker Michael Shearer runs 360 cows on a property in the Teapot Valley, west of the town of Brightwater.

The fire broke out the day before Waitangi Day and grew to cover an estimated 2300ha of largely forestry land; hotspots were still being damped down two weeks later.

It did not get onto Shearer’s farm but came right up to the tanker track on the boundary and could have spread further but for 25ha of firebreaks.

He says the farm is now “a mess”. Pasture, fences, irrigation and water lines are damaged and he doesn’t expect to be able to milk again before next season.

“A lot of it is unknown damage until you turn things on. It’s going to take till winter to get everything back in order.”

Shearer is temporarily milking on the property of Brightwater farmers Bruce Ealam and his son Cameron, who he says had been “nothing short of amazing, helping us out”.

The fire started on Tuesday February 5 in Pigeon Valley, a few km south of Shearer’s farm. Shearer said that by Thursday the fire was raging all around.

With a state of emergency already declared, they moved his herd about 9pm across the Waimea River to a block leased by the Ealams.

Then about midday on the Friday they moved again, to the Ealams’ hop farm between Brightwater and Wakefield, where the cows could be milked. The property is a recent conversion from dairy to hops, with a still-workable dairy shed.

But Shearer said he would probably dry the cows off and move back to his farm as soon as he had access.

The growing regional drought which contributed to the fire meant the Ealams were on allocated water with little to spare and would soon be starting their hop harvest.

“I don’t think we’ve got too many options,” he said.

Drying off will mean the loss of about 3.5 months production or about 40,000kgMS.

“The infrastructure’s so damaged -- laneway and paddock-wise -- that we can’t be walking them to the shed every day and trying to repair the farm at the same time. So it’ll just take the pressure off from walking them and it’ll be one less job to do.”

How much of the firebreak damage and production loss would be covered by insurance remained “up in the air,” said Shearer.

He had received loads of baleage and hay from the convoys of donated feed trucked in from the south, and said the Ealams had also opened their silage for his cows. Fonterra had supplied him with some water.

Shearer said drought had been the big problem for the region “and quickly that problem got forgotten”.

The Thursday night evacuation was “the worst,” and his cows were “pretty spooked by the whole situation”. “On the Friday when we milked them it took a long time.”

They had since settled into their temporary home.

Shearer is an award-winning young farmer, as a winner or place-getter in a variety of trainee and farm management awards since 2012.

He is now staying in Brightwater with his wife Cheryl and three children aged five, three and four months.

No smoke without fire

Farmers are hoping to retain the right to burn off crop residue under the new national Fire and Emergency New Zealand (FENZ) fire authority due to be set up mid-year.